The SEC Office has spoken, and Alabama’s Quinton Dial will play January 7th when the Tide faces Notre Dame in the BCS National Championship Game in Miami.

Here is the official statement from the SEC:

“The Southeastern Conference has completed its review of video from the 2012 SEC Football Championship Game. Several plays involving both teams were reviewed. After review, all subsequent action will be handled internally by the 2 institutions and the conference office is satisfied with their actions.”

This morning on Birmingham’s 97.3 Smashmouth radio, in an interview with Steve Shaw, head of SEC officiating, Shaw said they looked at the hit on Murray more than any other play this year. They ruled that Murray was not a defenseless player because he was the defender on an interception return.

This is absolutely the correct call. It’s really not hard.

Tim Brando won’t be able to sleep tonight. His on air lie campaign crying that Murray was “behind the play”, at the “center of the field” and “a defenseless player, the victim of a helmet-to-helmet vicious hit.” Sorry Tim, you’re wrong (and a biased idiot). 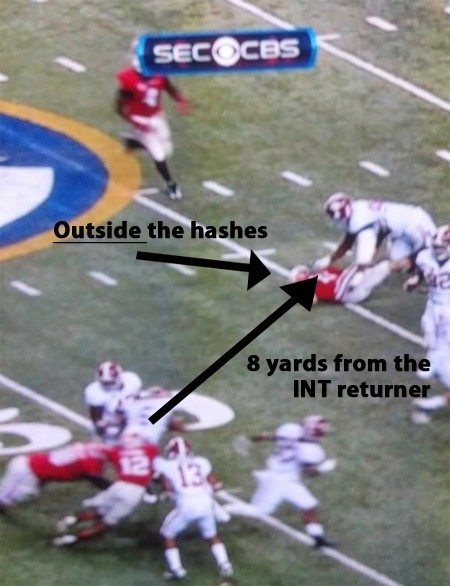 Shaw did say that a personal foul could’ve been called, but that the hit was not deemed an infraction worthy of suspension.

Interestingly, in the same interview, shaw refused to comment on the Georgia player flagrantly trying to gouge the eyes of Alabama’s Dee Milliner. (below)