When you hear Alabama Crimson Tide, you think football factory, right? Well, apparently the team contending for its third BCS National Championship in four years is more than that.

Other SEC schools making the cut were Georgia (10), LSU (11), Texas A&M (14), Florida (15) and South Carolina (19). Auburn and Tennessee apparently suck at football and academics, as neither made the list. 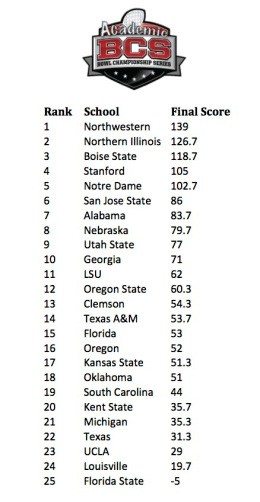 So when you think of the top academic institutions in the country, add Alabama to the Stanfords, Notre Dames and Northwesterns of the world. The Tide does more than just dominate on the gridiron.

10 thoughts on “Alabama #7 in the Academic BCS; leads the SEC”