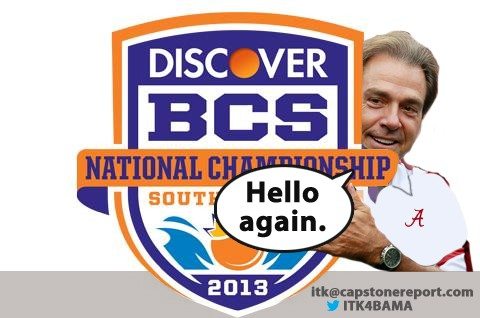 As I wrote last Sunday, the Alabama Crimson Tide controls its own destiny this football season as the top two teams in the BCS fell on Saturday night.

Oregon had the toughest road, and I fully expected them to have a tough go and lose once in the final three weeks. But in ironic fashion, the Stanford Cardinal…an SEC-style team playing in the Pac 12…took care of business early, grinding out an impressive 17-14 overtime win in Eugene, Oregon. The defensive effort by the visiting team was one that likely brought a smile to the face of Tide coach Nick Saban.

But the whammy was on earlier in the night when the 4-5 Baylor Bears pimp slapped the Kansas State Wildcats convincingly 52-24. It would be the first time in history that a team with a losing record would upset at BCS #1 contender.

The streets of Tuscaloosa flooded with the results of the two games, which now puts the Crimson Tide back into serious title contention.

With Auburn up next as a qualifying game to get to Atlanta, it’s hard to imagine a more perfect chip falling into place for Alabama head coach Nick Saban. Bama’s head man will have his team’s focus like a laser as it gets ready for Saturday’s game against the 3-8 Auburn Tigers.

If Bama passes that test, the road is pretty simple to get to Miami. Beat the team from the SEC East who has had more creampuffs in front of them this year than Honey Boo-Boo.

Georgia has had two true tests this season. One ended in a 35-0…say that out loud so you can hear yourself saying it, 35-0…defeat at the hands of South Carolina. The other was a turnover riddled game against Florida. And there’s no guarantee the Bulldogs will escape their annual showdown with the Ramblin’ Wreck next Saturday. Georgia Southern had their way running a similar style triple option offense in the first half against the Dogs on Saturday.

The waiting game is now on to see who will move into the #1 and #2 spots, but conventional wisdom says it’s Notre Dame and Alabama. Although, it would not be shocking if the Fighting Irish slipped up against USC next Saturday. Though USC’s quarterback went down, we’re talking about a team who should have lost to BYU, Purdue and Michigan.

This is why we love this game… Let the games (the next two weeks) begin!