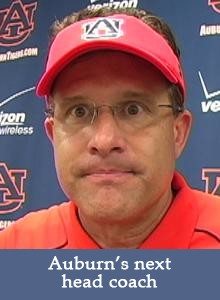 As the pulverization of Auburn football continues down on the plains, Auburn prepares to make its next move in hiring a new head coach.

“We need a leader, not a loser!” rang out from the tarmac in Auburn in 2008 as Athletics Director Jay Jacobs ignored Gene Chizik’s 5-19 record at Iowa State and brought the perennial loser to Auburn.

So now that history has repeated itself and Gene Chizk has totally destroyed a second football program, who will be the answer this time around?

My sources are telling me it’s Gus Malzahn.

Petrino, of all the candidates out there, is the most proven. His track record of success on the college level speaks for itself. You’re going to have to overlook the pimples that make him an unattractive hire, but quite simply he’s the best of the best.

However, the higher ups at Auburn don’t want Petrino because of his morals. Or at least that’s what they’ll say. Window dressing, as it were.

The fact is, they want an “Auburn man.” What’s that, you ask?

Simple. An Auburn man is a puppet that Pat Dye and company can work through to operate business as usual in Lee County. Why else would you hand the keys of your program to a coach whose only experience as a head coach is 5 wins and 19 losses?

A Bobby Petrino is similar in style and personna to a Nick Saban. It’s not just a “my way or the highway” mentality, but more of a “It’s my way…now get the #$&% out of my office” mentality.

So forget what you’ll hear about morals. It has nothing to do with that. Auburn would sell its collective soul to beat Alabama. It’s their bar. It’s why they exist.

It has everything to do with the committee approach to running a football program, which ironically is what ultimately undid Alabama following Bear Bryant’s retirement and death. It took Alabama twenty-five years to figure out the best thing to do was hire the best coach possible and stay out of his way.

Having to hire “an Auburn man” (code for letting our power brokers have a continued hand in what’s going on here) is strangely similar to the path that made Alabama the butt of so many jokes following Bryant’s death. “They have to hire a coach who played for, coached under, or shook hands with the Bear!” My how times have changed; irony is a funny thing.

Another name I’ve heard is Jimbo Fisher, who would obviously leave a healthy FSU program to take 2-3 steps down the ladder to walk into the mess that is Auburn. Still another is Jeff Fisher, the longtime Tennessee Titans coach and current coach of the St. Louis Rams. Yeah, that’s totally going to happen. His son plays for Auburn, but so does Rick Burgess’ boy. I don’t see the Rick and Bubba show coming to a halt because “the step brother called.”

So it all comes down to Gus Malzahn…essentially a coordinator hire with one year of junior league college head coaching experience for the Red Wolves of Arkansas State.

It makes sense, kind of. Football is evolving to a point where trickeration and deception is preferred in place of real, man football. Malzahn’s dipsy-doo, trickeroo offense was a thing of beauty when he served as OC in Auburn….as long as he had a freak of nature at quarterback. And we know that every team is just lined with Cam Newtons and Johnny Manziels.

So look for ole Gus and Crazy Kristy to be announced the week of the Iron Bowl, or possibly the week after. After Bama crushes Auburn for the second year in a row, at least future Iron Bowls will be fun again. Not because Auburn will have a chance. Nick Saban will anihilate Gus Malzahn.

No, future Iron Bowls will be enjoyable because Alabama strength coach Scott Cochran will have more messages for Gus Malzahn like this one:

47 thoughts on “Who will Auburn hire next? Looks like it’s Gus Malzahn”