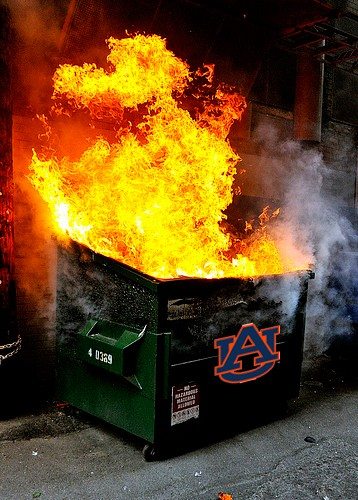 Well, week two is behind us in the 2012 college football season, and here is what we know.

Seems the towel waiving, limo rides and goofy, cultish catch phrases have run their courses. And what Tiger fans are now left with is the very real possibility of a losing season…in Gene Chizik’s fourth campaign, after years of what we were told was “steller recruiting.”

In fairness, Nick Saban too had a down year in his fourth season at Alabama. 10-3 was the result. Any takers on whether or not the Chiz will match that mark this year?

The fact is, without Cam Newton, ole Frank Chiznik is 16-12 at Auburn. That mark is 21-31 lifetime as a head coach. Even with Cam’s 14-0 contribution, the Chiz will most definitely drop below .500 lifetime in this his sixth season as a head man. Even the most delusional kool-aid drinking barner has to find that fact discomforting.

Louisiana-Monroe figured to be the Tigers’ opportunity to rebound, regroup and refocus this Saturday. That was until the Warhawks downed #8 Arkansas in their house. But come on, what is the likelihood La.Monroe can do it again? Well, actually…

ULM quarterback Kolton Browning shredded the Hog defensive backfield for 412 yards passing and 3 touchdowns, and Auburn’s pass defense hasn’t been anything to speak of since Tommy Tuberville called Auburn home. And Kiehl Frazier…good gracious. By the end of the third quarter against Mississippi State the sophomore phenom had completed more passes to the Bulldogs than his teammates. Who knew anyone could make Kody Burns look like an All-American. If the bagman is in town for the game and has another $180,000 handy, maybe he can catch ULM’s QB Browning in pregame to see if he’ll switch jerseys.

Remember, this is an Auburn team that had to pull out late game heroics just to beat Utah State last season…the game that distinguished 2011 from being a 6-6 year from the much more admirable 7-5. And it’s a team that could likely own their own loss to La.Monroe by Saturday night. How funny will that be? The lone rallying cry Auburn fans have used ad nauseum in trying to find some flaw in Saban’s tenure at Alabama will likely come to roost on themselves against the same team this weekend. Irony is a dandy, ain’t it?

The bottom line is Auburn fan, we’ve been telling you for years what a sham your program is. You have a puppet head coach who was 5-19 when he was hired, and save one flash in the pan season, is destined to continue that legacy on the plains. And since he won a national title just two years ago…although questionable on so many levels…get ready for the public outcry against you from talking heads everywhere if you can him just two seasons later.

The Auburn program has been coming apart at the seams since the Chiz stepped on campus, with a rap sheet of suspensions, arrests, NCAA questions and other questionable activity lined up like trick-or-treaters on Halloween night. Auburn has been masquarading like a real football program for too long, and now, this season, it seems the mask is finally coming off. Welcome to reality, barners.

Your program is a dumpster fire. Ole Miss or New Mexico will likely be your first win of the season, that is if you are better than the Rebels, and at this point that possibility is not certain. Ole Miss has looked respectable in its first two games. And oh yeah, they’re 2-0. Remember what that used to feel like? Who knew that your Tigers would welcome Texas A&M into the Western division by giving them “ups” ahead of you as you barrel faster than a speeding bullet for that newly created 7th position in the division?

And get ready for Tuscaloosa. You might wanna get a jump on Christmas shopping Nov. 23. The Tide is going to enjoy stringing your Tigers up and beating them like a hapless piñata; unless you’re a sadist you might not want to see it. 36-0 and 42-14 is about to have company.

And speaking of Tuscaloosa, your big brother is aiming for its third National Championship in four years. How’s that taste as you look ahead and wonder who if anybody you’ll beat this season? With Bama firmly planted at #1 heading into week three, is there an Auburn fan out there who wouldn’t trade Bama’s questions about pass protection and replacing a third string runningback for their own?

In fact, on the topic of questions, just two games into this season there are many more questions than answers. But perhaps the biggest one is, when will Auburn shed the bush league get-rich-quick schemes and invest in becoming an honest program with a solid foundation that yields longterm dividends?

Like their next national championship, we’ll likely never see it.