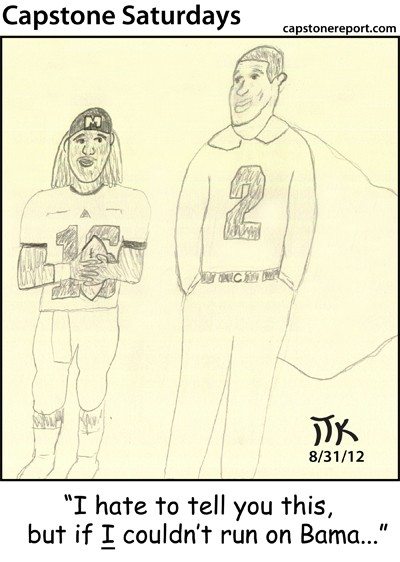 Denard Robinson is an amazing talent. Especially when he’s playing Navy. Or San Diego State. Or worse, today’s Notre Dame, which is not your father’s Fighting Irish.

Visit any intramural field on any college campus today and you’ll find a flag-football quarterback whose throws resemble Robinson’s. His deep ball is often left up for grabs for whoever can jump the highest.

In the open field he’s dangerous. The problem is, he won’t see the open field Saturday night. Alabama will contain Denard Robinson, hedging him in and forcing hime to beat them with the pass…which he can’t do.

The team that held the most dominant offensive college football player in 30 years to 39 yards on the ground…a player who towers over Michigan’s mighty might QB by half a foot and outweighs him by close to 60 pounds…will spend the evening containing him and forcing him to use his arm rather than his legs. Cam Newton, could also pass, but even then had some freak of nature things go his way in one of the more unlikely games of the century. Denard ain’t no Cam, and the planets don’t appear to be aligning for him this Saturday night.

On the occasion that Robinson does get loose, in his tenure at Alabama, Nick Saban has brought the best of open field tackling to Tuscaloosa. Defensive players don’t get out of position, and they don’t whiff at air as you run by. Arm tackling in T-town left with Mike Shula as he packed up the U-Haul for Jacksonville.

On the flip side, Bama’s offensive and defensive lines are beastly compared to the Wolverines. This may be the best offensive line Alabama has ever put together on one unit. Eddie Lacey will have an array of holes to run through all night, as will TJ Yeldon, poised to introduce himself to America as the next great Alabama running back.

This will open up the field for the Tide’s new receivers to shine. Amaari Cooper. Remember the name.

Look for Robinson to have a flash or two, just enough to give Brent Musberger something to gush about. But don’t count on him giving Bama’s defense more than a flesh wound.

6 thoughts on “Why Alabama will beat Michigan”