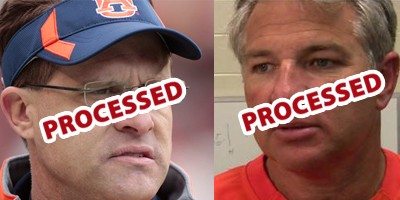 Gus Malzahn, earning $1.3 Million as the offensive coordinator at Auburn, has reportedly taken a $550,000 pay cut to become the head coach at Arkansas State.

Remember, a year ago reports had Malzahn potentially earning $3 Million annually to become the head coach at Vanderbilt.

Malzahn’s departure comes on the heels of defensive coordinator Ted Roof’s departure to assume the same position at Central Florida.

Could it be the rats are jumping from the ship before it sinks?

A 28-point beatdown on your home turf to your most feared and hated rival can do much to rattle the foundations of a program, especially with the promise that a stable Saban regime in Tuscaloosa means more is on the way.

Through the NCAA investigations, what Alabama fans wanted to see was an explosion. But instead, they will get to enjoy an implosion.

Anyone with a non-biased orange and blue brain could see that the footsy style of football Gene Chizik has employed at Auburn from the beginning would not work in the SEC, at least not long-term.

Towel waving and playing to the crowd works for a season, as long as that season is accompanied by a freak of nature at quarterback.

But when the dust settles and the truth emerges, friends, the Auburn University football program is a mess. How big the mess really is down there…well, that’s something we’ll get to see in the days, weeks and months ahead.

But it appears the charade is over. Auburn is still just Auburn, and the average coaches on the staff apparently want out as soon as possible.

Now, expect the Phillip Marshall’s of the world to spin the next hires into oblivion, claiming that “Chiz has done it again!”

But make no mistake, the next coaching search will be for the head man in Lee County when it becomes abundantly clear next November that Auburn will never beat Alabama again.

As long as Nick Saban resides in Tuscaloosa and Gene Chizik and his band of clowns are in Auburn, the ODK Foy Sportsmanship Trophy will have a permanent home in the 35401 zip code.