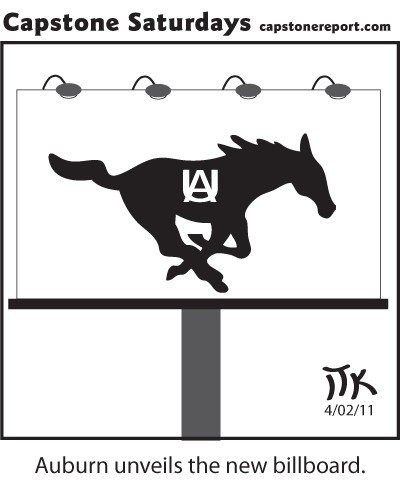 It’s been said before that perception is reality.

If that is indeed the case, then from sea to shining sea, the “reality” is that Auburn is the dirtiest program in all of college football.

Because, nationally, overwhelmingly, that is the perception.

Nobody buys that Cam Newton turned down six digits to come to Auburn for free.

Nobody buys that four former players on HBO with nothing to gain and everything to lose were lying.

Nobody buys that other players regurgitating the party line (with everything to gain…or maintain) are telling the truth.

Nobody buys that a 5-19 coach in just two years suddenly turns into Knute Rockne.

Nobody buys that a prominent AU booster and casino boss under heavy Federal suspicion of buying politicians wouldn’t do the same with players.

And nobody buys the idea…since McGlover put it so eloquently–“the Alabama game is everything”–that Auburn’s power brokers aren’t 100% “all in” to doing whatever it take$ to ensure that they never return to the domination they faced in the 1960’s and 1970’s.

Well, nobody except “the Fambly” and the state media, that is.

However, everyone buys that when Saban’s feet hit the Tuscaloosa tarmac, it was go time in Lee County. Desperate times called for desperate measures. And in their desperation, they hit the jackpot, albeit now it appears temporarily.

In a strange way, Auburn winning the BCS championship* may have been the best thing that’s happened to Alabama football in a while. Because finally…finally…the nation got a whiff of what Alabama fans have had to smell for three decades.

Now it appears the source of that stench…good ole fashioned Auburn B.S….is well on its way to hitting the fan.

Compelling arguments have been made referencing Auburn’s reckless abandon possibly leading to the death penalty. That fate may be a stretch, but looking a little closer I’m not so sure.

One thing is for sure: Lindsay Lohan and Auburn share the same chances of regaining their former images of innocence.

They say that any press is good press. But I bet there’s a group in Indianapolis tonight who would beg to differ.

The NCAA is most lethal when their backs are against the wall and their crediblity is on the line. The organization doesn’t possess the ability to monitor all schools to the same degree at the same time, but it possesses more than adequate punch to pull a detractor out of the pack and make an example of them.

And when that happens, Auburn will again be the leader of the pack as the most penalized team in college athletics.

Is Auburn the new SMU, with a well-defined track record of doing whatever it takes to stay ahead? Again, if perception is indeed reality, all eyes are on Indianapolis to see if the Plainsmen will receive the same loving embrace.