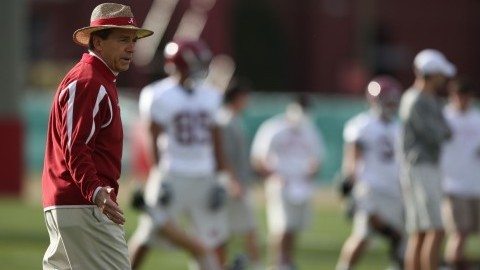 From the AP comes this report on the Alabama Crimson Tide offense and spring practice:

Alabama coach Nick Saban isn’t one to lavish praise on his football team, especially not during spring practice when the goal is improvement.

He’s having trouble finding much fault with an offense that returns virtually every playmaker from last season, including Heisman Trophy winner Mark Ingram.

“I feel really good about the way we’re going on offense,” Saban said on Wednesday. “The quarterbacks are playing well. We’ve got good skill players all the way around, and they’ve done a really good job.

Offensively, that would be an important objective for spring practice and next season.

ALSO this from Alabama Crimson Tide running back Mark Ingram: “There were times last year when they were putting eight or nine in the box and we were still running it,” Ingram said. “We wouldn’t get the ball out to the perimeter, to our playmakers. That’s just one thing that we have to do, and that’s a point of emphasis that we’re looking at this spring.

“When people are trying to load up the box to stop the run, we get the ball to them so they can stretch the field and make plays. They’re dangerous and we’ve got to give them the ball.”

“I think it’s safe to say that he’s a different player,” McElroy said. “He stepped it up tremendously. He’s even probably surpassed what he did as a freshman.”

And how are things going this spring?

“They were making plays,” Ingram said. “When we were taking shots downfield, they were making plays. They weren’t dropping balls. Greg was making the right reads, so that showed up. Instead of incomplete passes or interceptions, those were big explosive plays. I don’t think it’s anything that anybody should be too concerned with, because we’re going to stay a balanced offense.

“We’re going to run the ball but we have playmakers and they’re going to make plays. We’ve just got to put them in the right position.” (read the entire AP report embedded below)