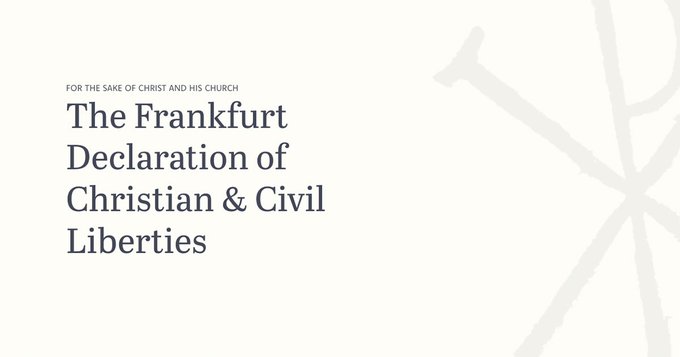 A group of independent Christians from around the world issued a statement against globalist totalitarian schemes. The new statement called the Frankfurt Declaration includes leading signers like Dr. Voddie Baucham, Dr. John MacArthur, Dr. Tom Buck, Dr. James White and other leading pastors. The signers lean heavily Reformed but there are non-Reformed signers.

The website is available here; however, it was returning 502 and 503 errors since about 11 p.m. central last night. The website troubles likely come from the heavy load of people attempting to read the declaration that outlines how Christians can and should limit state power.

The opening of the statement reads: “Christians, Against the Abuse of Power”

“In the course of human events, it sometimes becomes necessary for people of good faith to speak out against the abuse of power. This should be done only after serious and prayerful deliberation, and even then, in an attitude of humility and with respect for the authorities that have been established by God. Such protest should be expressed in the hope that civil authorities who are found to be eroding rights and liberties may yet fulfill their God-given responsibility as their rightful guardians.”

“In December 2021, basically every politician wanted to introduce a vaccine mandate for everyone,” Riemenschneider said. Riemenschneider and other Christians issued two statements in 2021 providing guidance to evangelical Christians about these state actions. “Now we are doing the next thing.”

That next thing is the Frankfurt Declaration. The process of putting this statement together began in March 2021 when Riemenschneider “was approached by a brother from the UK.” It was hoped that pastors from around the globe could produce a “full response as to what happened during Covid.” The initial group included pastors from Canada, Europe, and Africa, Riemenschneider said on the Dividing Line. However, the group could not reach a consensus so a smaller group still representing pastors from around the globe continued work and released this document.

For more info you can watch the discussion on the Dividing Line.