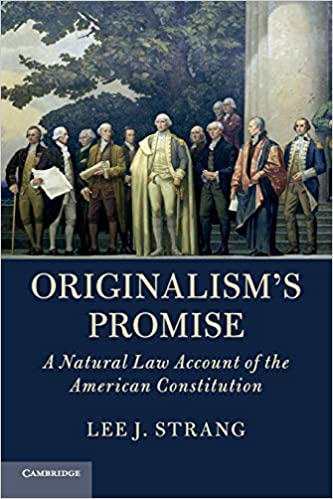 A great primer on Originalism

This is the perfect time to consider this book. In the aftermath of questionable decisions of the Roberts’ Court, and the debate over President Donald Trump’s nomination of Amy Coney Barrett to the Supreme Court, everyone is thinking about the Constitution. Lee J. Strang offers a compelling argument that originalism is the best way to approach the constitutional text.

Oringinalism’s Promise: A Natural Law Account of the American Constitution is a powerful defense of originalism and a strong refutation of judges who ignore the written text. Strang writes, “A federal judge’s failure to follow the Constitution’s original meaning today is analogous to run-of-the-mill lawlessness.”[1]

The book is part history, part legal philosophy and part analysis. By combining all of this Strang presents a systematic argument for how to best understand the American Constitution. In fact, if I were to compare this to a book a conservative Christian might read, it is similar to William Lane Craig’s new book on the Atonement. Craig examines Atonement through historical, philosophical and just punishment legal theory to argue for the logical coherence of penal substitutionary atonement. And, Strang’s mission in this book is to argue for the logical, historical and philosophical coherence of originalism.

Strang highlights a key problem of the US Constitutional system in his opening Acknowledgement page. He writes, “The impetus for this book first arose over eighteen years ago during my initial constitutional law courses when, to my surprise, the courses focused almost exclusively on Supreme Court opinions that themselves frequently paid little, and often paid no, attention to our written Constitution.”

This is a fundamental problem when a hierarchy takes unto itself the power to definitively, “Say what the law is,” as Chief Justice John Marshall claimed as the judiciary’s role. This type of power becomes the ultimate power—as long as it retains legitimacy.

Because the Supreme Court is acting as a superlegislature. As Ben Shapiro noted, “Hamilton argued that should the judiciary start to become a superlegislature, it would undermine its own moral authority, and made the case for its merging into the legislature. And since the judiciary’s orders were not self-executing, it would take the implementation and agreement of the executive to actually effectuate judicial opinions. The actual algebra of judicial review was supposed to work like this: the Supreme Court would declare a law unconstitutional; the executive could either agree or disagree; the legislature could either agree or disagree. The Supreme Court had no power to cram down its opinions on the other branches.”[2]

It has not worked out that way. The Supreme Court regularly invents new rights and rewrites laws to suit its desired political outcomes. Conservatives do not like this. So, what is the way forward?

Ad fontes. Return to the source. The actual text of the constitution. Originalism offers a way.

According to Strang, “Originalism is the theory of constitutional interpretation that identifies the Constitution’s original meaning as its authoritative meaning. This meaning is the text’s public meaning when that text was ratified.”

This is important since textualism—a legal theory focused on the meaning of a text—came under fire after Justice Neil Gorsuch’s decision in Bostock v. Clayton County, Georgia. Conservatives attacked Gorsuch in a Twitter thread that encapsulates the conservative reaction to the decision that the Civil Rights Act of 1964 applies to gay and transgender employees. National Review called Gorsuch’s opinion “halfway textualism.”

This is why Originalism is important. The meaning of the text at the time it was written provides a firmer foundation. If we allow changing definitions of a word (sex in Bostock) to determine a law or constitution’s meaning, then the foundation is not solid. It is fluid.

Which provides society a better way to build for itself and future generations? If the law is not settled and clear, then why invest? If the language of law and constitution are subject to whim, then what will that mean for contracts?

Any philosophy other than an Originalist leads to a system more like China’s Rule By Law instead of the Western Rule Of Law.

The best parts of the book include an exposition of how the American Founding Fathers were Originalists and how this reigned until the New Deal Era introduced progressive legal approaches that were “extrinsic” to the Constitution.

The history explored is highly relevant to understanding the legal milieu of the Founding Era. It was helpful to see the influence of Blackstone’s Commentaries on the Laws of England discussed as a key influence of Founding Era legal thought.

Of course, there can be questions about the meaning of a text. “Semantic meaning alone is not the full measure of constitutional meaning,” (p. 35).  Notice the benefit of understanding the background. This is similar to how biblical interpreters attempt to understand the Ancient Near Eastern influence on the Old Testament legal codes and practices.

Strang examines a range of topics in the book. It ranges from judicial virtues to differences between natural law and positive law.

“Positive law is the primary mechanism by which members of a society (of any significant complexity) work together to achieve their corporate common good and individual human flourishing. Positive law must play this role because the natural law cannot because it underdetermines how societies coordinate their members’ actions. Societies therefore create positive law to coordinate toward the common good.” (p. 161).

This is a very good point. And, for a conservative, it gives us a glimpse as to why different societies operating under the general principles of God’s revealed natural law are able to find different answers to lesser questions based upon their context.

Strang discusses natural law and its application to the legal philosophy of originalism. He finds originalism best fits the natural law’s goal for human flourishing.

And this is a good reason for evangelical Christians to read the book and ponder its arguments.

Strang’s work is timely, necessary and valuable. It is especially useful for anyone who thinks or writes about the US Constitution.