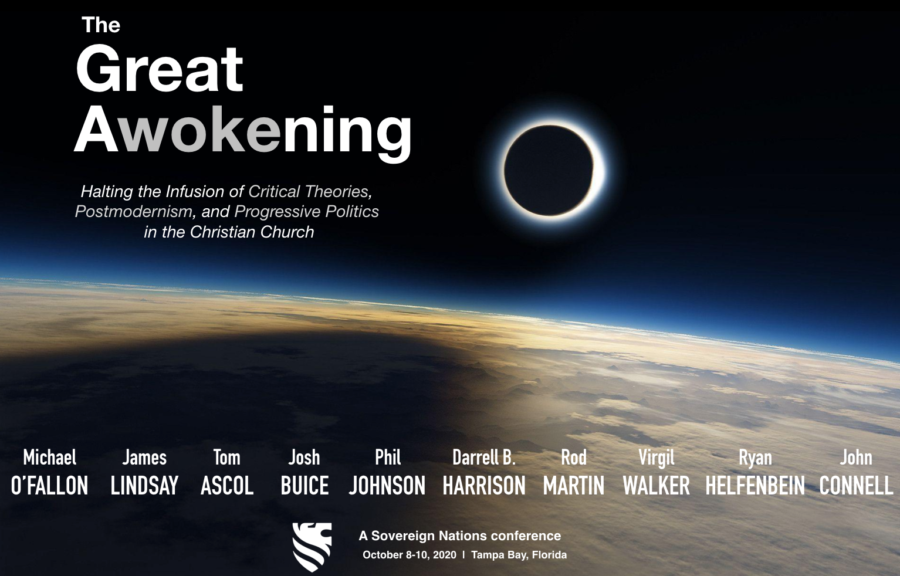 Tom Ascol: ‘It is time for Christians to wake up, stand up, and speak up by defending the gospel of Jesus Christ against this deadly assault.’

The fight against Critical Race Theory and Intersectionality accelerated in the last month when President Donald Trump announced these divisive and anti-American training sessions would stop in government offices. This was an important development that exposed how Leftists were re-educating federal employees. And it isn’t only happening in the federal government. Major corporations and even churches embraced these trainings.

“The same concepts, ideologies, and theories that are deconstructing our civilization are now being fully embraced by the evangelical Church,” said Sovereign Nations founder and conference organizer Michael O’Fallon. “It appears that those behind this infusion of CRT and intersectionality into the Church did not believe that there would be enough of us that would be willing to examine and expose the what, who, why, and how of this insidious movement.”

We are in the midst of the Great Awokening—and a new conference is planned to combat the rise of Woke ideology infecting the Church. Sovereign Nations is hosting October 8-10 in Tampa, Florida a conference featuring Michael O’Fallon, Tom Ascol, Josh Buice, Darrell Bernard Harrison, Virgil Walker, Rod Martin, John Connell, Ryan Helfenbein to talk about the dangers of Critical Race Theory and Intersectionality on the church. Kicking off the pre-conference is an important lecture by one of the foremost experts on Critical Theory, Dr. James Lindsay. Lindsay is co-author of Cynical Theories and founder of New Discourses.

According to conference speaker and Southern Baptist Pastor Dr. Tom Ascol, “The conference will sound warnings about the new woke religion that has swept over our nation and has infiltrated many of our churches. My heart has broken over the way the godless ideologies embedded in that movement are ripping churches apart and provoking violence in our streets. It is time for Christians to wake up, stand up, and speak up by defending the gospel of Jesus Christ against this deadly assault.”

First, “The entire concept of radical subjectivism that accompanies critical theories, intersectionality, and postmodernism that is infecting the whole of our society in nearly every sector: education, political, legal, the sciences, corporate, and economical. This segment will be the first pre-conference portion of our time together.  I will be addressing these issues along with Dr James Lindsay, author of ‘Cynical Theories.’”

Second, “The next part of the overall conference will be focused on how these theories have syncretically infused themselves into what is known as the Evangelical Church, specifically, the Southern Baptist Convention, the PCA, CRU, Moody Bible Institute and various other previously conservative denominations and para-church ministries. This dangerous ideology has crept into our churches, seminaries, universities, and into our conferences and materials.  To this end, we will have Tom Ascol, Josh Buice, Darrell Bernard Harrison, Phil Johnson, Virgil Walker, Brad Jurkovich, Rod Martin, Tom Buck, John Connell and Ryan Helfenbein addressing this pressing issue in the Christian Church.”

Of course, Progressives are not happy. Woke Christians are angry at the conference, its organizers and its message.

You can see in the image the attack.

Walker responded on social media to one attack. He said, “I’m not sure what Bradly finds ‘disgusting.’ Is it Darrell and me (whom he hasn’t met) or the topics we are going to present which he hasn’t heard? In any event, this is mild. However, it reflects WOKE Christianity which finds ways to be upset by things that don’t directly impact them.”

The topics Walker and Harrison are scheduled to discuss: “What is Behind Black Lives Matter?” And a second session on “Similarities between Coneism and the KKK.”

One conference speaker is well acquainted with the way Woke forces attack conservative Christians. Dr. Tom Ascol endured months of attacks for daring to release the By What Standard? Documentary.

“I am not unfamiliar with vicious attacks by people who don’t like the message I preach,” Ascol said. “That has been the lot of God’s people throughout history, however, so I am not discouraged by it in the least. Our Lord was rejected, betrayed, and crucified. His followers should not be surprised when we experience opposition & criticism. I am saddened by the strong & often vitriolic opposition that ‘progressive Christians’ are mounting against those who are speaking out against the destructive ideologies of Critical Theory and Intersectionality. My grief is not due to any impact their words or actions have on me directly, because, quite honestly, is nil. No, I am saddened because so many are trapped in a pagan religion that that they may genuinely believe is Christianity. My sincere desire is for them to be set free by the power of the true gospel.”

Another criticism leveled at the conference is that Dr. Lindsay, an atheist, is scheduled to speak to Christians.

However, this is absurd. Dr. Lindsay is an expert on Critical Theory and was recently hosted on Albert Mohler’s podcast. Dr. Lindsay was also featured in Dr. Ascol’s documentary By What Standard?.

“Sovereign is not a ministry,” O’Fallon said. “I specifically created Sovereign Nations as a platform to encourage ‘beyond our tents’ discussions. However, in this case, we have a pre-conference with Dr. Lindsay addressing issues in regards to critical theory that he is literally the best in the world to address. The pre-conference will conclude on Thursday afternoon before the main conference that will be addressing progressive theories and movements in evangelicalism. Dr. Lindsay is not coming to the pre-conference to provide answers in regards to evangelical Christianity.”

In fact, the conference is not only for Christians.

“The main sessions of the Great Awokening Conference is not a discussion that is just meant for Christians, although the conference will definitely benefit Christians. It is meant for everyone that is concerned and confused in regards to why these theories are entering into faith and conservative politics. As of now I have men and women of various faiths that have registered for the conference – which is exactly what my goal has always been. Many will be in attendance that will hear clear, Biblical, scholarly presentations that have never heard the Christian faith elucidated in this way before in their lives. And that, I believe, is something that our Church has been missing for a long time.”

You can signup and find more information about the conference here.