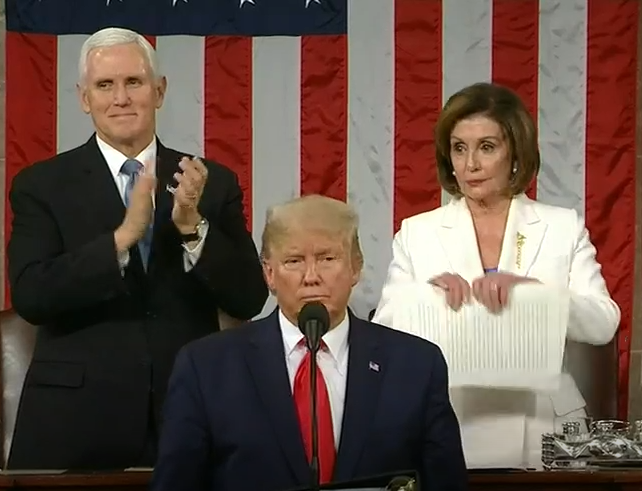 Nancy Pelosi violated tradition in her introduction of the president and capped the night by tearing up the State of the Union speech. Her actions demonstrate something—something important. Her tearing up a speech on the State of the Union telegraphs what Democrats want to do to the Union. Shatter it. Rip it to shreds. Destroy it and replace our rights and privileges with a new system where power is concentrated not in the states and the people but the elite power centers of New York, LA., Silicon Valley and Washington, D.C.

The desire to eliminate the uniqueness of the states is at the heart of Democratic calls to abolish the Electoral College and change representation in the Senate.

Democrats want to force on flyover country rules designed for their liberal enclaves.

We see the poop-covered streets of San Francisco and would prefer that not to be the case in the rest of the Union.

But, Democrats assault on the Union doesn’t stop there. They’ve weakened our very system.

Democrats spent the last three years undermining confidence in our institutions and elections. The institutions were tarnished by idiotic and unfounded impeachment. The elections were undermined by a constant perpetuation of a Russia-Putin-Trump myth. This has done great harm to our trust in elections.

Now, Democrats illustrate that they really don’t care what the people have to say. With their dawdling release of Iowa Caucus results, the Democrats made our political process into a joke.

The Elites of the Democratic Party don’t care about what is good for flyover country. They would prefer to ignore the demands from the people for good jobs and security from threats both without and within.

So, how should a Christian respond to what the Democrats are doing?

The Christian response to the Democrats assault on America and our liberties begins with the answer one question: Is America a force for good?

If America is a force for good, and its defense of religious liberty and work as a selfless bulwark against the abuses of autocracy demonstrated throughout the 20th century seems to prove that it is, then, America must be defended.

If it is to be defended, then we must fight Democrats.

The Christian duty is to deny Democrats access to office—at all levels—for anyone committed to the Democratic Party platform.

I can’t believe I’m writing this. But, as one of Dr. Moore’s tireless critics, I should point out something positive. Last night, Dr. Moore, the head of the Southern Baptist Convention’s Ethics and Religious Liberty Commission (ERLC) and a rabid Never Trumper praised President Donald Trump.

Dr. Moore said, “I am thankful to President Trump for raising the issue of the sanctity of human life at the State of the Union. He is right that the abortion culture is an injustice and should be ended.” He continued, “I look forward to working with the President and other elected officials toward that end in terms of policy.” The entire statement is embedded here.

Does this mean that Dr. Moore realized the Democratic Party is the party of infanticide and it is the Christian’s duty to make sure they never seize power? That’d be real progress. However, before we can judge that to be the case, Dr. Moore should take real steps to show he’s abandoned his Never Trump ways.

First, he should openly admit that it is the Christian’s duty to deny the Democrats the machinery of the state.

Second, he should state that in 2020, it is a moral option to support Donald Trump.

Such steps would restore a measure of confidence in the ERLC.

It is doubtful we will see those confidence building measures taken.

2 thoughts on “Iowa, the State of the Union & the Last Days of America’s Democratic Republic”