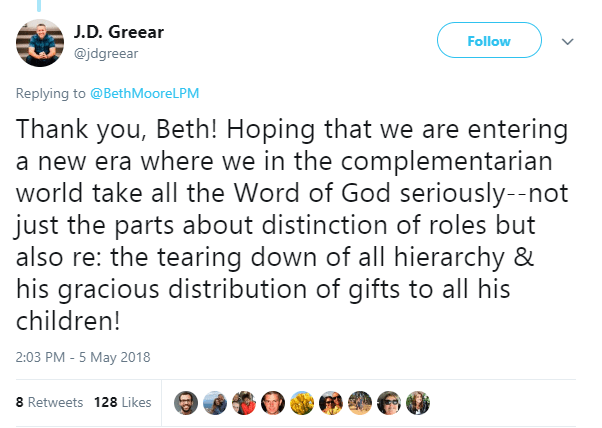 J.D. Greear is sloppy with his theology. He’s claimed Muslims and Christians worship the same God (something rejected by evangelical scholars like William Lane Craig, Nabeel Qureshi and James White), and now Greear has argued that the Bible teaches the tearing down of all hierarchy.

Greear’s stunning assertion was made in a twitter exchange with Beth Moore. Greear tweeted, “Thank you, Beth! Hoping that we are entering a new era where we in the complementarian world take all the Word of God seriously–not just the parts about distinction of roles but also re: the tearing down of all hierarchy & his gracious distribution of gifts to all his children!”

So, obviously, though sloppy in his wording, not all hierarchy is abolished. That would be at root unbiblical and dangerous. It would lead to spiritual and temporal anarchy as there would be no government to restrain temporal chaos and no rulers within the church to discipline wayward Christians.

But even a limited reading of his ALL confined to the realm of a complementarian gender roles is troubling.

Affirming that all of God’s children are equal and given equal gifts in no way implies hierarchy was abolished.

Paul’s writing to the Ephesian church seems to establish this point. According to Andrew Lincoln, “ὑποτάσσεσθαι means to take a subordinate role in relation to that of another…Outside the NT, there are, however, only two examples of the use of the actual verb ὑποτάσσεσθαι for the wife’s attitude toward her husband, Plutarch, Conj. Praec. 33 (Moralia 142e), and Ps-Callisthenes, Hist. Alex. Magni 1.22…though the call for wives to obey husbands was common in Hellenistic Judaism (cf., e.g., Philo, Hyp. 7.3; Josephus, c. Ap. 2.24 § 201).[1]

Other scholars point out while Paul encouraged voluntary submission, the context of the ancient world was significantly different. “Since wives are addressed directly and husbands are not told what to do if the wives do not submit, it is probably right to assume that their subordination will be voluntary; their subordination will of course be to husbands who love them as Christ loved the church (v. 25). However, what we know about the ancient world would lead us to believe that husbands would have the right to enforce submission if it was not voluntarily offered.” [2]

Lenski observed this idea of submission is counter-cultural, “The idea is that the will of God who arranged the marriage relation at creation is likewise the will of the Lord Christ for Christian wives. Every Christian wife will then follow “what is well-pleasing to the Lord” (v. 10), “what the will of the Lord is” (v. 17). She subjects herself, we may say, for the Lord’s sake: his will is hers. A Christian bride will then rebel against the idea of altering the marriage ceremony so that ‘obey him’ is left out; she will do so on account of her Lord, no matter what worldly brides may do.”[3]

So, holding to a conservative view of the Bible requires us to approve of the submission of the wife to the husband in a Christian marriage. Submission then necessitates a hierarchy since one is submitting and the other is the head. The problem is that Greear confuses equality of standing before God with functional standing.  All of us can affirm that every one of God’s children male and female are equal before God; however, none of us can affirm that we all have equal responsibilities, gifts or duties.

Augustine supported this view in his writing on Galatians 3:28, “Difference of race or condition or sex is indeed taken away by the unity of faith, but it remains embedded in our mortal interactions, and in the journey of this life the apostles themselves teach that it is to be respected.… For we observe in the unity of faith that there are no such distinctions. Yet within the orders of this life they persist. Epistle to the Galatians 28 [1b.3.28–29].”[4]

All can affirm that Christ has abolished misogyny and other sinful discrimination. “So it may be surmised that in conscious contrast to such Jewish and Greek chauvinistic statements, early Christians saw it as particularly appropriate to give praise in their baptismal confession that through Christ the old racial schisms and cultural divisions had been healed.”[5]

Yet, that does not mean all offices, positions and authorities are open for any person. As the Danvers Statement asserts, “In the church, redemption in Christ gives men and women an equal share in the blessings of salvation; nevertheless, some governing and teaching roles within the church are restricted to men (Gal 3:28; 1 Cor 11:2-16; 1 Tim 2:11-15).”

Despite Greear’s assertion, it would seem a functional hierarchy still exists and is part of God’s ordered will for the world we inhabit in general and His church in particular.

Greear’s careless tweet is a manifestation of his theological recklessness. He affirms Christians and Muslims worship the same God, and now he affirms that the Bible teaches the end of all hierarchy. All can easily see the slippery slope where this leads.

At this critical time, the Southern Baptist Convention cannot afford to have J.D. Greear as president. His theological sloppiness is a danger in a time of postmodernism.