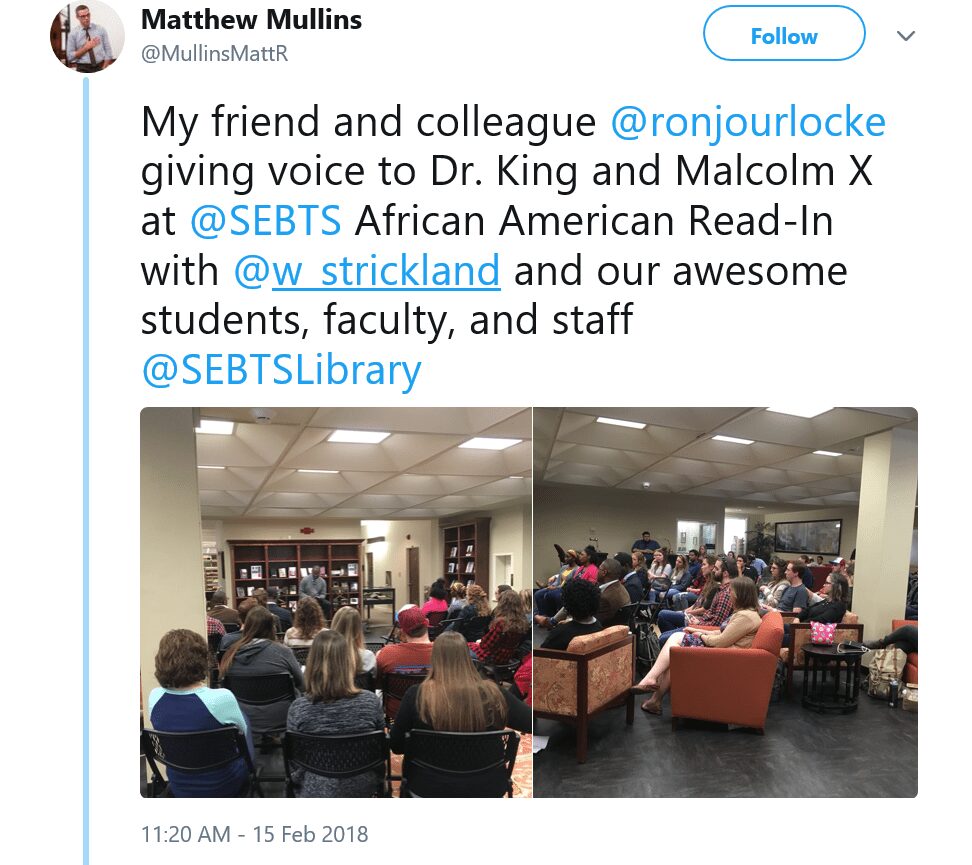 Here are the tweets showing the Black History Month event where Malcolm X is included in the readings.

Southern Baptist Convention Vice President Walter Strickland tweeted, “Grateful for the opportunity to participate in our annual African American Read-In @SEBTS. We read and discussed ‘A Letter from Birmingham Jail’ by #MLK and Malcolm X’s ‘The Ballot or the Bullet.’ #BlackHistoryMonth.”

According to this National Review post, Malcolm X was a radical anti-Semite. How would Southern Baptists feel about celebrating an anti-Semite at a place funded by our Cooperative Program? Aren’t Southern Baptists committed to racial reconciliation? How then can we include celebrations for those who promoted hate?

Celebrating a Muslim at a Southern Baptist seminary? Shocking.

However, it shouldn’t be shocking since our ERLC and IMB joined a lawsuit to help build a mosque. It is all very intersectional!

How does this get beyond outrage? That is the question for all Southern Baptists. Make sure to contact your church leadership about this nonsense. Plan for your church to take a full complement to Dallas this June for the single purpose of overturning the Russell Moore, George Soros, Progressive takeover of the Southern Baptist Convention.

It should be clear to all. It is time to drain the swamp. We need our SBC officers and entity leaders to have the common sense to avoid racial identity politics. We need an SBC vice-president who can identify Cultural Marxism and Critical Race Theory when progressives attempt to introduce it into our Convention.

Our Convention is replacing the Gospel with a focus on Social Justice. We must fight the indoctrination of our future pastors and theologians. This must stop.