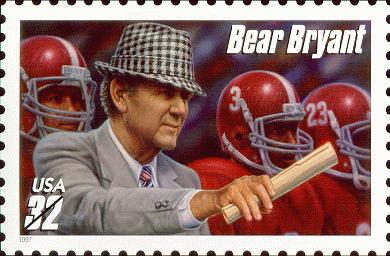 Maybe you have heard of the houndstooth hat or maybe not. Most likely you have at least seen it, or at least the fabric, even if you aren’t a football fan. The Houndstooth hat has become a major part of Alabama’s football history and Alabama is all about football. Houndstooth hats are most often found in black and white and they appear to be very close to a checkered pattern when viewed from a distance. Up close though it possess a very distinctive hounds tooth on each section.

The pattern of this hat has only become so popular in Alabama football because of Coach Bear Bryant, the University of Alabama football coach from 1958 to 1982. Prior to that the pattern was one that was woven into Scottish Lowlands clothing. Gun club patrons and men would wear it to show style. Since then it has become popular around the world and used for just about every kind of clothing. The most popular modern use of the pattern besides Crimson Tide hats is for dresses and fashion.

In 1964 there was a major battle between the American Football League and the National Football League for Alabama Crimson Tide star Joe Willie Namath. Joe Willie Namath was a major player at the time who had piqued the interest of both leagues. When it came time to seek advice on who to sign with Namath turned to Coach Bryant. Bryant had been Namath’s coach for three years of college level football, he was an obvious choice for advice.

Namath wasn’t a small time player, many credit Namath with raising the profile of an already championship caliber program in Tuscaloosa. As such, both the NFL and the AFL were very interested in drafting and signing Namath. Bryant and Namath went through negotiations with both the Jet’s coach and owner as part of what was a recruiting process.

Being a flamboyant business man, Jets’ Owner Sonny Werblin presented Coach Bryant with a houndstooth hat in the hopes it might gain a little support for the AFL. Bryant took to the hat and wore it to a game. All it took was one game for fans to notice the new hat and immediately create the legend.

As Coach Bryant’s career continued he began to introduce more houndstooth hats into his line of hats. Fedoras hats were the main barer of the houndstooth print for Coach Bryant. Because of how big the hat had become, local stores began to carry hats so that Coach Bryant would have a selection should he choose to shop for a new one.

The University of Alabama has two colors, crimson and white. As soon as that famous hat was donned by Coach Bryant, many have considered houndstooth to have become the third, and unofficial, color of the legendary football team. This can be used to show how much this hat means to its team and fans. A whole culture has developed around it.

The Bryant Museum holds a lot of memorabilia from the team but you can guess what holds a special place in the museum, two of Bryant’s original houndstooth hats. The museum even holds a Waterford Crystal replica of the hat created by Bromberg Jewelers. This hat was a houndstooth hat that was designed specifically for the museum and is now on exhibit there.

By this point you are probably wondering what size hat Coach Bryant wore. You wouldn’t be alone, it is one of the most popular questions for the Bryant Museum and online. The answer is 7 5/8ths.

Over the years many famous fans have worn the pattern. Most notable of the recent history might be the “Houndstooth Twins” Ashley and Maegan Bailey. These two wore matching houndstooth hats to the Alabama games and cheered on the Crimson Tide. Ashley was also dating one of the team’s trainers.

In 2011 the houndstooth symbol became more than a football symbol though. It became the symbol of hope and solidarity after a tornado devastated Tuscaloosa. Houndstooth began to appear all over the state and beyond to support the recovery and remember the losses. Car magnets, T-shirts, stickers, ribbons, and more all bore the famous houndstooth pattern.

Many companies have tried to use the Hounstooth pattern for their logo but the University Of Alabama has been pretty stringent on its uses. Lawsuits have arisen from the denial of use for the logo. Cases have swung both for and against the University. No matter what the law says though, the pattern will forever be more a part in Alabama football than anything else it is used for.

Alabama houndstooth symbolizes one of the best teams in football history but it also the marker of one the best coaches, and men, in football history. Each and every athlete that has played under the name Crimson Tide is also represented by this pattern. It has also been the sign of solidarity between a community of people including players, fans, coaches and students that is strong, determined, and caring. Most importantly it’s a bond between those people and a team of hard playing footballers.

The houndstooth pattern and hat are the stories of past but they are not to stay that way. Current fans are expected to pass on the history of houndstooth to their kids just as the past generation has done for them. This will continue on and on so that the symbol and Coach Bryant will never be forgotten. Most importantly though, it is done to keep fans united and people united. When people are united there is no bounds to what they can do.

Houndstooth hats are still sold today online and in Alabama. The pattern is only one of many traditions and legends that the Crimson Tide have gained over the years. What are your houndstooth memories? Share your thoughts in the comments section. Roll Tide! And check out the site recommendations for Bama Houndstooth products.