Meanwhile, Auburn’s hardwood team is mirroring the mediocrity of its football program.  The other familiar basketball teams from Alabama are not faring too well either.

As of this writing, the Crimson Tide is 11-3 after a 10-3 non-conference effort and a convincing win against Texas A&M to open SEC play.

The Tide can go a long way toward justifying athletic director Bill Battle’s decision to keep head coach Anthony Grant, if it can defeat Tennessee on the road this Saturday.  After that, the Tide plays South Carolina, again on the road, before a date with top-ranked Kentucky in Tuscaloosa.

The game with the Wildcats is an early sell-out.  Fans of the Tide have been sporting “We want Kentucky” signs.  Is there reason for hope?

Alabama went 1-3 against non-conference opponents with name recognition.  It lost 84-74 to Iowa State, 97-84 to Xavier, and 53-52 to Wichita State.  The Tide won a sloppy 56-50 contest with UCLA in Tuscaloosa in late December.

The Tide’s best assets this season may be the senior leadership of guard Levi Randolph and the addition of two transfers who have been very productive so far.

Randolph has been praised by Grant for stepping up his game.

“He’s been our leader and deserves all the success that he has had,” Grant said after the UCLA game.  “It’s always going to be a team game, and a lot of things we are trying to do are team oriented.  But, he’s the first guy to tell you it’s about getting a win.  That’s where he has really stepped up, in his willingness to be vocal and compete on a nightly basis.”

Alabama’s transfers are former Birmingham News 2011 All Metro Player of the Year, Ricky Tarrant, a Pleasant Grove native who transferred from Tulane, and Michael Kessons, a product of Switzerland’s Longwood University.

Tarrant, a 6-2 guard, garnered SEC Player of the Week honors after the UCLA game.  Kessons, a 6-9 forward has added rebounding skills and outside shooting ability.  Guard Retin Obasohan has proved to be a valuable player coming off the bench.

The Tide’s current RPI rating is 34th in the nation according to ESPN.  To make the Big Dance this year, Alabama will have to do something that it has struggled to do in Grant’s tenure… win SEC games on the road.  If the Tide can get to 20-plus wins and avoid a poor showing in the SEC Tournament, an NCAA bid is possible if not probable.

New head coach Bruce Pearl has energized the barnyard with his colorful personality.  However, his clowning hasn’t helped on the court.  The Tigers are off to an 8-6 start with a loss to Vanderbilt to begin conference play.

The Tigers should be happy if they squeak out an NIT bid.

The Blazers hoopsters are making a case that the wrong UAB athletic program was given the pink slip.  UAB is 5-9.   It would have 10 losses, but an exhibition loss to UNC-Pembroke doesn’t count.

The good news for UAB is that it won its first conference game, on the road against Middle Tennessee.

The bad news is it won its first conference game against Middle Tennessee.  Conference USA no longer boasts programs like Cincinnati, Louisville, Memphis, or Marquette.   Besides the MTSU Blue Raiders, UAB will be competing against Florida Atlantic, Florida International, North Texas and other no-names.  Old Dominion has some basketball tradition, but C-USA is a shell of its former self.

With the loss of football, UAB is probably getting blackballed from the watered-down C-USA anyway.

The Blazers need to consider joining an Upwards league next year, everybody wins! 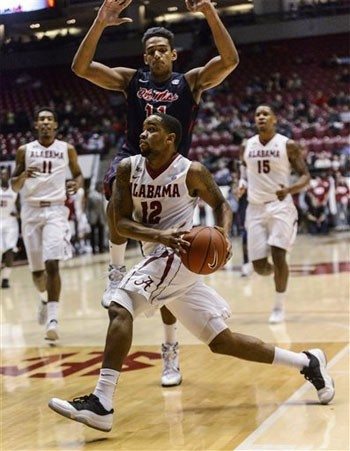 Troy has a nice new arena.  It hosted Ole Miss.  It lost.  The Trojans are 6-6 and look to continue that trend.

South Alabama was once a relevant basketball program, now sitting at 3-10.  The Jaguars football team made a bowl game this year though.

Birmingham Southern, a former NAIA national championship program that made an attempt at NCAA, D-I competition, is currently 7-4 in Division III play.

Besides the Crimson Tide, the state of Alabama’s best bet to have a team in the NCAA Tournament may lie with the Alabama State Hornets.  The Hornets have made the Dance before by winning the Southwestern Athletic Conference.  ASU is currently 6-5 overall and 2-0 in SWAC play.

16 thoughts on “State of Alabama basketball: Tide trending up. Auburn, others, not so much”