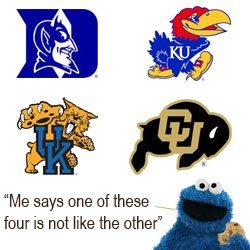 Pearl’s arrival in Auburn led to mild hysteria among Auburn fans. The University of Lee County rolled the dice on a proven cheater in Pearl, dismissed from the University of Tennessee for admitted NCAA infractions and banned from coaching by the collegiate athletics legislative organization.

By the way, on a totally unrelated note, how incredibly funny is it that Auburn has a player named Jack “Purchase.” You just can’t make some things up. But, I digress…

This basketball season for Tiger fans has come with much anticipation. Pearl has made more media appearances than a presidential candidate trying to take Ohio. In promotion of the Auburn program he’s appeared on every media outlet short of the Bobby T dance show. And if it’s one fanbase particularly easy to hype into oblivion, it’s Auburn. The cult that heralded a high school coach with one year of collegiate head coaching experience as the second coming of Nick Saban went into a frenzy over Pearl’s arrival.

But a 31-point thrashing has to concern to Tiger fans. This year may not be an “add water and win” year afterall. But the next play in the Auburn script will be a familiar one. Expect the next talking points from the orange and blue talking heads to be “next year will be our year.” Yep. That line is a familiar one in Lee County.

Across the state…
Alabama has looked good so far this young season. It’s still too early to measure progress against the disappointment of years past, but something definitely looks different about this team.

The Crimson Tide moved to 2-0 on the season with its win over Western Carolina last night. Say what you will about the Catamounts…a team that will hardly be mentioned come March…but they did hang around with Mississippi State, their other loss this season, even leading just before half. But the Tide looks to be the most athletic its been in recent memory, with a true versatile big man on the post in Michael Kessens. The addition of transfer Ricky Tarrant may prove to be huge as well, giving the Tide a boost from the bench. Tarrant added 18-points in Bama’s 80-74 win in last night’s game.

Bama returns to action this Thurday night hosting Southern Mississippi before meeting #14 Iowa State in the opening game of the CBE Hall of Fame Classic next Monday night. Bama will meet either Maryland or Arizona State the following evening. Auburn returns to action Friday against Louisiana-Lafayette before meeting Tulsa next Monday in the MGM Grand Main Event, a tournament featuring four unranked teams. But listen to Rod Bramblett and Tulsa, Oregon State and Oklahoma State will all magically be NCAA tournament teams come March.

15 thoughts on “Pearl’s Auburn gets killed by basketball power Colorado; Bama moves to 2-0”