With the 2014 campaign now within arm’s reach, a new report card from the Wall Street Journal shows who should and shouldn’t be talking trash. The offseason is built for talking smack, but numbers suggests that talking is basically all some coaches can do.

We’ll start at the top. Nick Saban owns a career 50-35 all-time record against top-25 opponents, a mark that’s 28-12 while at Alabama. Some of his most out-spoken critics have records that should lead them to stick a sock in it, rather than barking at his coat tails.

Only Bob Stoops owns a better mark at his current stop (or in his case, his only stop), at 50-23. “Big Game Bob” earned his name long ago, though recent history suggests otherwise. The most dangerous place to be is between Bob and a microphone, this so he can criticize Saban and the SEC. I’ll give him a pass, even though his last taste of national relevance happened just days after the Y2K scare. Yep, it’s been that long.

But then, there’s Mike Leach, the intoxicating intriguing coach everyone loves to interview…for some reason. Leach is often thought to be an innovator, a genius of sorts. If so, apparently geniuses beat up on cream puffs and that’s it. Leach owns an all-time mark of 13-38 against the top-25, including 1-7 at Washington State.

Speaking of innovators, Rich Rodriguez was once the cat’s meow, and was heavily critical of Saban in the offseason. Though Rich Rod owns a mark of 16-26 all-time against teams that matter. In ten tries he’s managed just 3 wins over the top-25 while at Arizona.

What about the ‘ole ball coach? I’ve said many times in this space Steve Spurrier’s best days are behind him. Want proof? His all-time mark is 62-52-1 against the top-25…just 10 games removed from .500. But at South Cackalacky, darth visor is a meager 18-23.

Others of note, Mark Richt’s only stop on the coaching trail has been at Georgia, where he is 34-31 all-time against teams that matter. He could dip under .500 this season.

Tennessee fan, think your program is in good hands and on the rise? Your coach has a 1-11 record overall against the top-25, just 1-6 while donning the puke orange that y’all wear.

Mississippi State fan, your coach would be fired at almost any other stop, but for some reason Dan Mullen has been given a pass like no other. At 2-21, he is apparently teflon…or football just doesn’t matter to you.

Gus Malzahn’s only shot at a top-25 school ended in a loss at Arkansas State. Last year’s season, sponsored by Lucky Charms, helped his record to 5-3.

See for yourself; here’s the full list of current coaches and their record against the top-25. Interesting that some who can’t get their talking done for them on the field have to do it off… 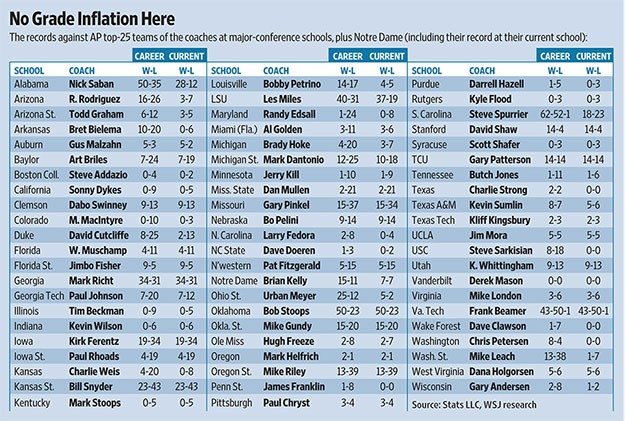