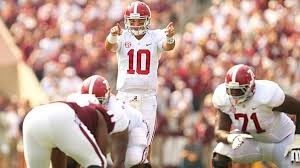 1. AJ McCarron
Bama’s winningest quarterback in history takes an unreal resume into any big game. Saturday will be no different as the 2-time National Champion playcaller directs the Alabama offense in unfriendly territory. AJ can lock up a Heisman campaign with a solid performance, and like CBS’ Gary Danielson said this week, “If AJ has his A game going Saturday, he’ll be impossible for Auburn to beat.” 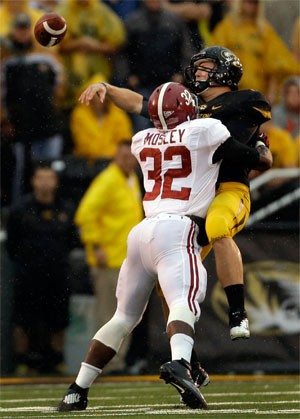 2. CJ Mosely
If you’re at the game Saturday and want to have some fun once the Tide builds a lead, stop watching the football at the snap and just watch CJ Mosely. He’ll take you to the ball every time. If there was a heat-seeking missle in human form on the gridiron, it’s CJ Mosely. Fast, physical, smart, a leader, and disciplined. That’s #32, and he will be everywhere Saturday afternoon.

No doubt the coach who says he watches every play of every game a recruit he’s interested in has ever played in by now has watched every play of every game Gus Malzahn has ever called. He’s well aware of tendencies, formations and multiples that the dipsy-do will throw at them. That doesn’t mean there won’t still be some pop-warner stunt Bama’s desperate opponent this Saturday won’t seek to employ, but it does mean when it happens Alabama will be the most prepared team in college football to react, defend and stop it. 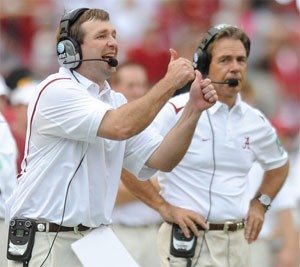 4. Kirby Smart
Kirby Smart was never taking the Auburn job last year. On a good source I can say, he hates them. It’s intriguing that his questions to those asking him questions centered on the Tigers’ potential woes with the NCAA. Apparently that wasn’t well-received, though the powers that be already had their minds made up on who they wanted anyway.

If there’s one man who knows defense as well as Nick Saban it’s Kirby Smart. Smart will likely take over for Saban one day, and though most transitions of this nature don’t turn out well, something tells me this one would. He’s a tireless recruiter, and a superior X’s and O’s coach with a proven track record of shutting down opposing offenses.

5. Man Football
Nick Saban said when he arrived that he wanted Alabama to be a team people don’t want to play. 80 wins, just 13 losses, and 3 National Championships later, I’d say his prophecy has been accurately fulfilled.

The last time Bama lost a road game was October 9, 2010. The reasons for the Tide’s success are many fold, from superior recruiting, to unreal conditioning and strength training, and a mindset that looks at environments like the one the Tide steps into Saturday as clutter.

6. That Alabama doesn’t have to resort to trickery
There’s just something cheap about having to continually play the shell and nut game with an opponent, or trying to snap the ball before the other team is ready. An offense, like Auburn’s for instance, which is based on trickeration, is the equivalent of a 140lb. dweeb sucker punching someone in a bar, then sprinting out the door. Alabama’s offense, in contrast, is someone tapping you on the shoulder, informing you you’re about to be pulverized, then instructing you to meet him in the alley to meet your fate.

Gus Malzahn’s dipsy-doo, trickeroo is just cheap. It’s the welfare of college football offenses. Sure, it can work against certain opponents, but in the end it leaves you feeling empty and guilty for not being able to do things the right way. And, every time it has faced a physical opponent this season those wacky numbers have been fed a dose of reality. Like Rolondo McClain once said, everybody has a plan until they get punched in the mouth. Here’s to waiting for that fist to hit its target this Saturday.

7. Bama’s Athletes
They’re everywhere, at every position. Trained killers programmed to be mentally tougher than anyone they face. Year upon year of top recruiting classes suit up for the Tide every Saturday. Receivers, linebackers, specialists, running backs, linemen, defensive backs. All suited and ready with the best preparation college football has to offer.

8. Auburn Delusion
Yes, I’m thankful for it. If none of the three players at the end of the Auburn-Georgia game make a play on the ball, Saturday has a totally different feel. Still rabid, but not as delusional. And yet Auburn fans can’t see past that fact. Why? Because fantasy is far more satisfying to them than reality.

The Auburn mindset is like a person walking in a casino, pulling a slot and winning big. “Because it happend” they think it’s going to happen again. That verses another person working hard to make a living. Auburn delusion, when the air is released out of their preverbial balloon, is simply precious. You’ll have to ready yourself for the “…but if you told me beore the season we’d be 10-2 I’da taken it!” talk, because their delusion never comes down to earth. It just changes form

I’m just thankful that Alabama football is built on a rich tradition of excellence, hard work, winning and championships. Not wishing upon a star.

There are more than eight things for which to be thankful…many more. But my family is calling and it’s time to eat. So like me, I hope you have a great time eating some turkey, appreciating family and the blessing you have, and getting ready for some fun on Saturday. Roll Tide!

4 thoughts on “THANKSGIVING DAY: Eight things to be thankful for today about Alabama”