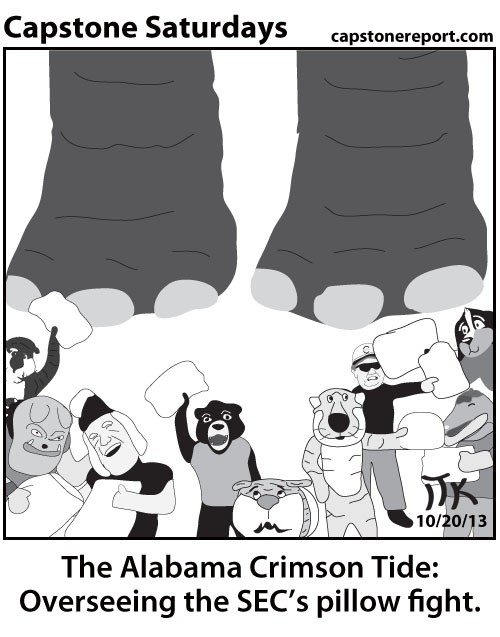 We all love college football for different reasons, but one of those universally, invariably, is what is simply known as “upset Saturday.” The weird, annual anomoly where on the same day several upsets pop up like those strange mushrooms that appear on your front lawn out of nowhere. All over the country…different games, different teams in different states, but the same results.

Saturday the SEC began eating itself in prevention of an 8th consecutive national championship for the conference. First it was Missouri taking down Florida. Technically this was a mild upset, but the ailing Gators under the latest failed coordinator-turned-head coach experiment were never really in the game against Missouri. The team whose mascot looks like he belongs in a children’s bedtime storybook owned the once proud Gators.

Then there was Vandy downing the smug Mark Richt and his band of thugs, the Georgia Bulldogs. As the James Franklin legacy grows, the Bulldogs’ chances of returning to Atlanta to exact their revenge on mean ole Nick Saban and company slipped away that much further, and last year’s “five yards short of significance” now appears like five miles. Georgia is once again the chronic underachievers we love to enjoy.

Then the Vols finally got a taste of victory over an old nemesis. Steve Spurrier is as washed up as a victim in the beginning minutes of a CSI episode. As the ole ball coach experienced coaching amnesia on the sidelines in Knoxville, making moves that would make even Gene Chizik scratch his head, it appears the Gamecocks are about to find themselves in the same coaching hostage situation that FSU, Penn State and Texas have been in before. The game has passed Darth Visor by, but he’s apparently the last to know.

Of course our friends in Lee County had a big win as well, and to their credit, the Tigers played their game and prevailed. The law of averages had to catch up with Johnny Manziel sooner or later, and true to form, Auburn luck called for it to be on the day they faced him. Texas A&M’s already pitiful defense has been even more depleted by injury in recent weeks, losing even more inside their contest with Auburn. Simply put, A&M’s defense couldn’t stop a group of girl scouts. Their games are hard to watch, because arena football is boring and predictable. Still, AU won the shootout, extending upset Saturday that much more.

Then there were the Black Bear Rebel Thingies taking down LSU. Ole Miss was at a crucial point in their season. Bama took their manhood several weeks ago when they still believed. Auburn kicked them the following week, following Bama’s blueprint for emasculation. Then Texas A&M ripped their hearts out in a heartbreaking, last-second loss. For the Black Bear Rebel Thingies to respond in a win over the rival few of their fans have ever seen them defeat, it was quite a milestone.

But then, after all the muck, mire and pillow fighting in the SEC, there was Alabama.

The Alabama Crimson Tide is a machine. The Tide quickly takes away the emotion and hope you’ve built up going into “Bama week” with shots to the mouth, early and often. Nick Saban’s Alabama gets off not on victory, but perfection.

Saturday Alabama accomplished just that. This team is scary good. Stocked with five-star studs relegated to covering punts, kick-offs and coming in late to preserve shut outs, against the Hogs Alabama didn’t allow a point. Or give up a sack. Or commit a penalty. Or commit a turnover.

Owning as many National Championship rings as he does losses, AJ McCarron once again was stellar, tossing three touchdown passes…including one to the finally recovering Amari Cooper…and leading his team to yet another win.

But it’s equally exciting to know your school and alma mater isn’t moved by the undertow of teams falling all over the land. It’s one of the things under Alabama head coach Nick Saban that makes Alabama, Alabama. And it’s just another reason that makes upset Saturday fun to watch. While you watch the fires of defeat burn across the land, you know it won’t be touching your own camp.

Here’s to looking forward to next weekend, and win number seven in a row over the Vols!