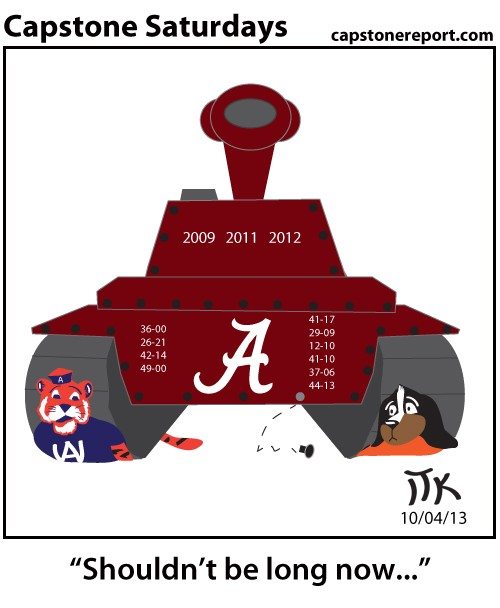 The recent news concerning Alabama All-Conference safety HaHa Clinton-Dix has been music to the ears of some itching fanbases hungering for relief. Hoping that the DJ Fluker revelation was the hors d’eouvre to a coming entrée, opposing fans can’t get enough of the news.

If you’re a Tide supporter, the news isn’t good. But if you’re a Bama hater, it’s not the nuclear winter you’ve been waiting for either.

As light has hit this story in the last 24-hours, as in most stories, there are many chapters. The problem for Auburn fans and the like is, this one reads like a children’s bedtime story, not a juicy suspense thriller.

Clinton-Dix accepted a loan from a Tide strength and conditioning assistant following his car being burglarized. In a way only NCAA rules can do, the Bama staffer, Corey Harris, committed a sin by trying to do good. The loan reportedly has already been repaid, and experts agree that the infraction won’t amount to much in the long-run. The 1-3 game suspension is just what the doctor ordered with Georgia State, Kentucky, Arkansas and Tennessee coming up.

Still, there have been more incidents in this calendar year than in recent memory in Tuscaloosa. I’m not ready to say it’s a trend…yet. But one has to wonder if the foundation laid by those who came before current Tide players isn’t showing some wear. The biggest threat to the quest for excellence is complacency, on and off the field. Not paying attention to the smaller details,…from the girl who answers the phone when you call the Mal Moore Football Building to the safety who stands between a receiver and the winning score…can be the difference between superiority and South Carolina (good but never great).

But the biggest tragedy in the story is the relief that Bama detractors won’t feel. The momentary hope that the Crimson tank mowing them down Saturday after Saturday, year after year, won’t last much longer than a waft of bowel wind following a good Mexican dinner. And much to their disappointment, again, the only taste they’ll enjoy won’t be victory over Alabama, but the wrong end of Crimson tank treads.