Skip to content
Looking back on Saturday night’s game in the Georgia Dome, I have many regrets on the Tide’s opener for the 2013 season. But the biggest one is this:

I wish we had beaten the Hokies by 25 points.

The line on the game was 18.5, but if I could have an early birthday present, it would’ve been Bama covering that line and tacking on an extra 6.5 points for good measure.

I wish our physical defense had made big plays, shown speed and aggression and had totally stymied the Hokie offense. With the lone exception of giving up one big play, I wish we had pretty much kept Tech completely at bay the rest of the game.

And, if I could go way over the line and ask just a little bit more, I wish that, even if you took away the non-offensive points the Tide scored, we still would have won the game even with a struggling offense still finding a way to grind out what it needed to get the job done.

If I could jump in a time machine and go back to the frozen Nashville parking lots following the 1998 Music City Bowl, where the Hokies dominated Alabama in all three phases of the game, I wish I could tell those dejected Bama fans that in 15 years Bama would be a dynasty again, and that they would one day be griping about a more than three touchdown victory over Frank Beamer and company on opening day with a brand spanking new offensive line that replaced two NFL 1st rounders and a third, an Outland Trophy winner. 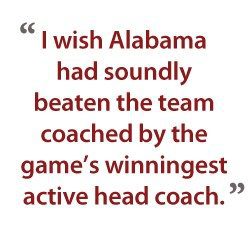 And forgive me, because I know this is way beyond the scope of what one man should be allowed to ask. But I wish Alabama had soundly beaten a team coached by the game’s winningest active head coach, and whose defensive coordinator has been by his side for a bijillion seasons, producing season after season of top, salty, physical, unconventional and aggressive defenses.

And dangit, I wish VaTech returned nine starters from the year before to give our new front five likely the biggest challenge they’ll face in a front seven until the Tide faces LSU in November.

And for good measure, I wish the separation between the two schools would have been superior special teams play on the part of the Tide, the phase of the game Frank Beamer’s teams are most known for.

And I wish we had the game’s best head coach who can magically transform adversity into a personal challenge that gets the very most out of his players. And I wish the next game Bama played was a little under two weeks away, with plenty of time to prepare for and correct the issues that its first game exposed before taking the field again.