Alabama head coach Nick Saban never stops recruiting. It was this part of the game that Saban says he missed when he dipped his toe in the NFL waters now almost a decade ago. Nick Saban is arguably the best in the land at this phase of the game, with top Alabama recruiting classes stacked atop one another like fine china.

Currently the Tide has 13 verbal commitments toward its 2014 recruiting class. I found if funny that among those is the top pro-style quarterback in the land, whom Saban and company stole right out from under the nose of Oklahoma’s Bob Stoops…the Sooner’s head man who this spring made some stupid assertions about the SEC’s dominance, that it’s all smoke and mirrors. How perfect that the SEC’s top program took Stoops’ lunch money and prize QB a short time after.

Within days, Alabama landed who many believe is the top wide receiver of the 2014 class, Cincinnati, Ohio’s Derek Kief. It seems that all of Urban Meyer’s huffing and puffing about Alabama and the SEC couldn’t keep this top talent in-state. Simply, right now, whoever they are, wherever they are, if Nick Saban wants them, Nick Saban and Alabama is gonna get them. The Tide has always been a national brand, but Nick Saban has changed recruiting at Alabama. This is not your grandfather’s recruiting class, unless your grandfather is willing to travel.

Gone are the Gene Stallings philosophies on recruiting. In 1990, his first year at Alabama, Stallings signed a group that would begin the foundation of his 1992 National Championship team: 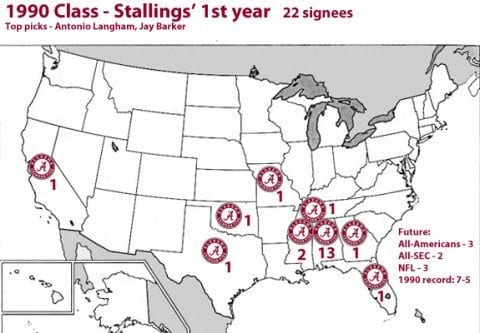 The 13 players signed made up well over half of his first class. Bama’s season that year took a nose dive early, starting 0-3, but finishing a respectable 7-4 before running into a buzz saw in the Fiesta Bowl opposite Louisville. But apparently, recruits saw something in those seven wins that attracted them the next year. 1991 would be the difference in positioning the Tide the following year: 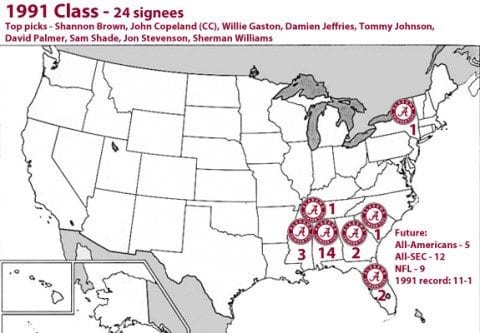 Again Bama’s 14 in-state players made up well over half of their ’91 class; it just so happened the Alabama crop of talent was good that year, and Stallings’ philosophy paid off. This would be the high water mark of his time on the recruiting trail at Alabama. 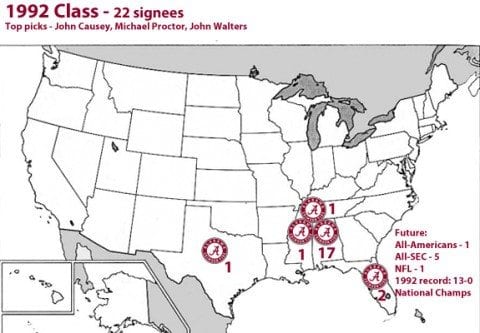 The number of states Stallings and his staff touched for the 1992 class fell from 9 in 1990, to 7 in 1991, to just 5 in 1992. The momentum of good recruiting and a dominant defense led Alabama to its 12th National Championship that year, but depending on in-state talent to sustain a football program would soon begin to show. After the pummeling of Miami for a National Title, and with Auburn falling on its sword with Pat Dye’s resignation, it seemed every prospect in the state wanted to wear crimson…proven by the 17 players that made up the brunt of the class.

But Gene Stallings’ philosophy may have proven itself to be limiting. With the rise of Steve Spurrier’s Florida Gators, and the exciting brand of football it presented, Alabama’s harvest in the state of Florida dried up. The Tide would not sign a single player from the sunshine state in 1993 or 1994…a state teeming with talent. 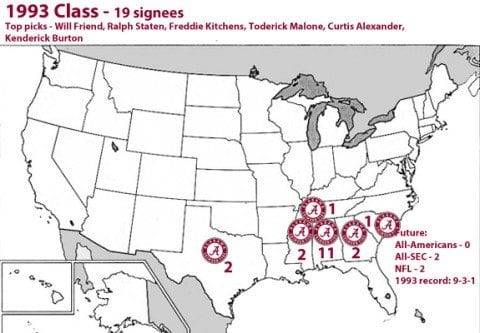 In 1993 and the year following Stallings’ trend of fishing right here at home began to shape the program as a team that could reach the plateau, but get no further. 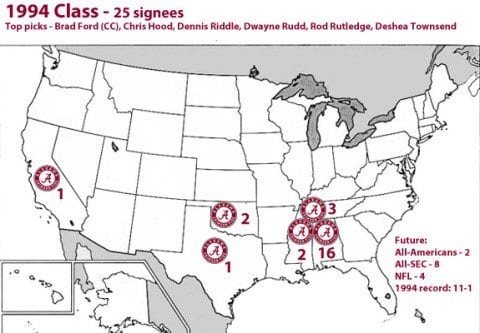 It would be an oversimplification to say talent was the only gap…it could have also been an archaic offensive system that failed to put teams away…but it was clear Bama had done its damage, and though strong, had been replaced by a new sheriff in town…wearing jorts.

Nick Saban’s arrival in January of 2007 brought many similarities to Stallings’ first days. Both inherited chaos in the program, though Bill Curry had taken the Tide to the Sugar Bowl the previous year. Still, like Stallings, Saban took on a program that had been dominated in-state for a streak of years. Auburn was riding a four-year winning streak over Bama when Stallings arrived. The streak was five when Saban’s feet hit the tarmac in Tuscaloosa. The program had no identity, no leadership, and nothing to suggest it could be what we now know Alabama football to be.

The answer, like that 1991 class, would be recruiting. 2007 was a so-so year for Saban and his staff. With only 30 days to hit the trail, his first class was respectable: 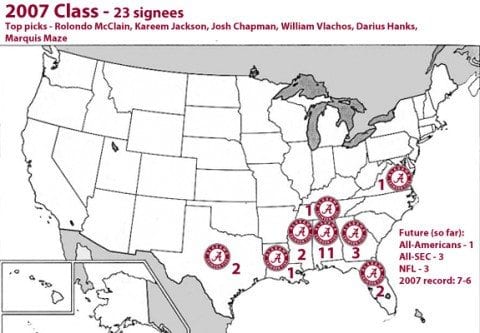 Like 1990, seven wins would be the result of his first season. But also like 1990, 2007 would be the groundswell to an unusually productive in-state crop of talent in 2008. Nick Saban would challenge Tommy Tuberville for fifteen players, and would take all fifteen from the Tigers, despite a six-game winning streak as an advantage.

Saban would in-effect come alive, as his players seemed to begin buying in to the lessons he was teaching. Something happened in 2008, with the dam breaking and prospects seeing the vision that this man who had once won a National Championship at LSU wanted to do. And boy did they… 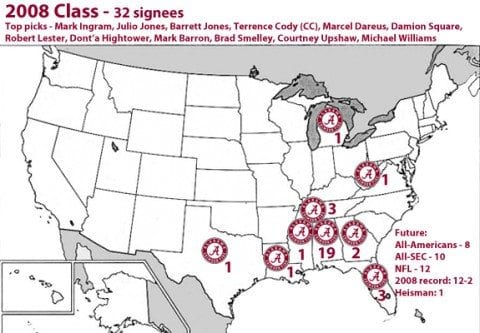 The Tide would touch 9 states in signing 32 players, 19 of those coming from Alabama. This of course would lead to NCAA recruiting reform, a common occurence when it comes to coaches and regimes unable to keep up with Nick Saban. 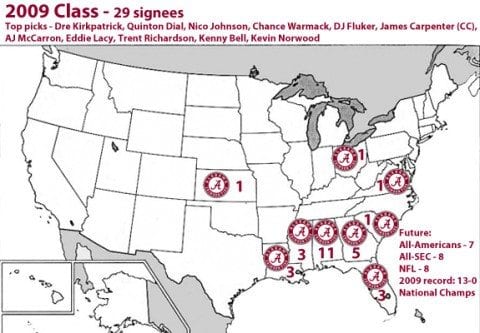 The following year would be just as strong, again touching 9 states to bring in another top class. Like the 1991 class that fueled the 1992 National Championship, 2008 would provide the momentum for an unbelievable run in 2009 again beyond. But unlike Stallings, who seemed to take his foot off the gas after the 1991 class and 1992 National Championship, Nick Saban’s foot has remained squarely on the accelerator…and it doesn’t seem that he intends to remove it.

Bama would touch nine more states in 2010, following its 13th National Championship in the Pasadena win over Texas. 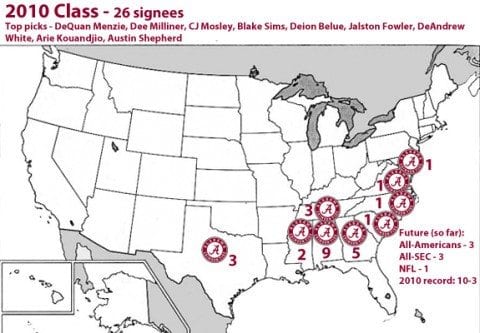 But the most interesting trend the Tide’s national brand. As the years have gone on, Nick Saban’s Alabama hasn’t settled into the same plateau mentality it faced under Stallings. Instead, Saban and company have created a system that lets them cherry pick who they want, where they want. 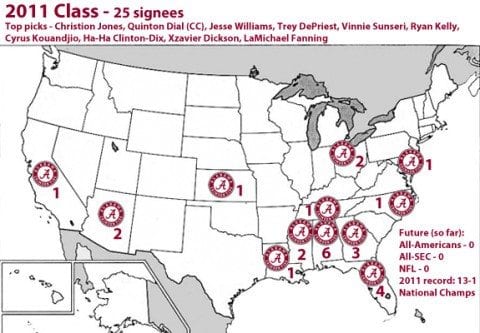 Closing out the four-year comparison of Stallings first years vs. Saban’s, you see the number of in-state players decreasing with the number of states taken from on the rise.

What does this all mean? Well for starters, it means coaches like Mark Richt can’t get Nick Saban out of his yard. Bama has lived in Georgia, taking an additional 8 players from the peach state in 2012…one more than it took from within its own borders. Saban has also led Alabama back into the promised land (Florida)…anyone glad he was able to snag Amari Cooper from Miami?

Simply, what we saw under Gene Stallings was a collection of hungry, talented players, some amazing defensive minds, and a perfect storm that led to 70 wins in 7 years. Now beginning his seventh year at the Capstone, with three National Championships already in his bag, Nick Saban doesn’t appear to be letting up, spreading his national brand wherever he dang well pleases…even if it means taking the top players within the borders of states where jealous coaches can’t close their mouths.

9 thoughts on “Has recruiting changed at Alabama? That answer is in your Sunday Cup of Coffee”