When your football program has fallen behind others in your state, division, league, and heck…everybody else, you start seeing signs. Indicators begin to pop up that there is cause for concern.

This weekend a recruit visiting the loveliest village on the plains shares one of those signs with us. He tweeted this picture out for all to see what is in and on the minds of the Auburn boosters, administration, coaches and players:

Has there ever been a time when the University of Alabama football program was so entrenched in the Auburn mindset? Nick Saban and company should have to pay rent for the amount of time he and his program spends between the ears of every Aubie alive.

Alabama football has always defined Auburn football for them. From the beginning of time (which is 1982 if you’re an Auburn fan), how the Tigers have fared against the Tide has been the benchmark for their program. I know a guy who won’t buy a car made in the years Bama has beaten Auburn. It’s safe to say he won’t be in the market for a new car for years.

It must be a feeling of hopelessness. Beat Bama. The team that you haven’t notched an offensive point against in two seasons of football. The team that not a single player on your active roster has ever scored a point of any kind against. Not a safety. Not a field goal. Certainly not a touchdown or point after.

Scores like 42-14 and 49-0 (which every Aubie knows could’ve been 77-0) don’t get flipped in a year. The differential on the field was much more than just points. It was personnel. It was coaching. It was coaches. And it was a mindset much bigger than “beat your rival.”

And in turn, after hiring a snake oil salesman who’s been a head coach just one year…equipped with just a dipsy-doo, trickeroo style offense to fend off the most dominant football coach the game has seen since Paul “Bear” Bryant…you do this to your players: “Beat Bama.”

It’s cruelty in motion. Why don’t you just take the guy pictured below and tell him “Marry Jessica Alba.”

So what happens next November when Auburn limps onto their own Pat Dye Field at 5-6 (and that’s assuming they can beat one fellow SEC team this year) and they get reamed for the third straight year? Do you take it down, or leave it up so the graduating seniors after the 2014 season are reminded of what they were never able to accomplish?

Instead, shouldn’t the signage say: 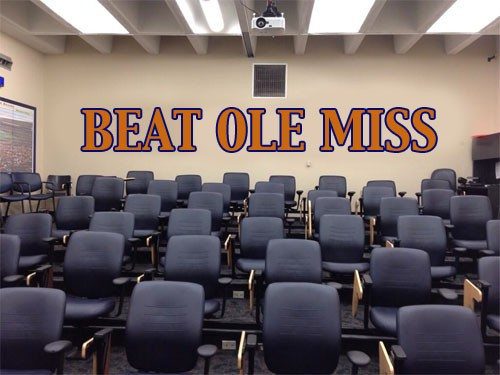 Or, this would probably be more realistic: 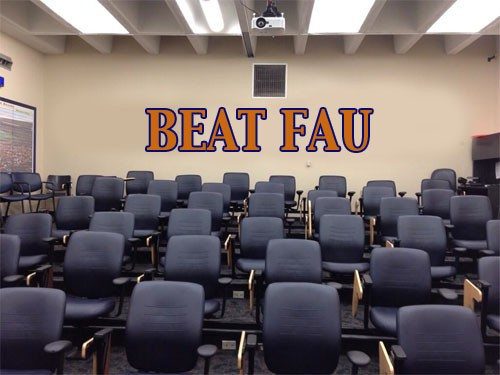 What happened in 2010 was just as cruel to the Auburn fanbase as a “Beat Bama” sign in the back of an Auburn meeting room. Like a gambling addict winning money in a casino slot machine, the Aubie was duped into believing seasons like that one can happen. It was the perfect, once-in-a-lifetime storm.

Auburn’s disadvantage (one of them) is that the Gus Malzahn offense isn’t new anymore. There are now plenty of undermanned teams trying to gain an advantage with quick snap counts and flag football-esque misdirection. The last time Bama saw Gus’ brand the score was 42-14.

For Auburn right now, “BEAT BAMA” is like telling your mentally deficient 6th grader “GET ACCEPTED INTO MEDICAL SCHOOL.”

At the depths of Alabama’s woes last decade, “Beat Auburn” was never the cry. Getting back to a place of prominence in the college football world was. But again, this signage helps you peer into the mind of the Aubie. Their world begins and ends with Alabama football. And “Beating Bama?” It is the end all. 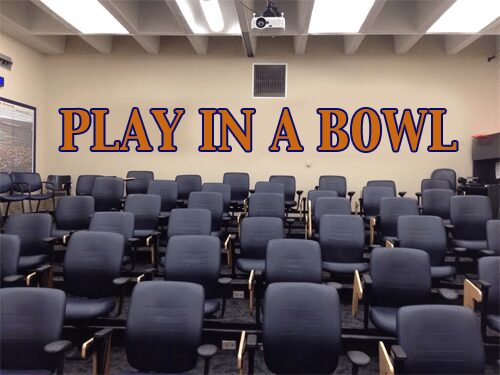 Do this and you’ve overachieved, and it means you’ve beaten your weak non-conference schedule and two SEC foes.

But a Beat Bama sign tells the world your goals are no higher than getting off the mat against the big brother that has you there. It tells recruits that while Bama has its eye on another national crown, their fourth in five years, we just have our eye on winning one game.

Not that it’s needed, but the Auburn staff could not have done Alabama recruiting a bigger favor. For what they’ve really told the world is: 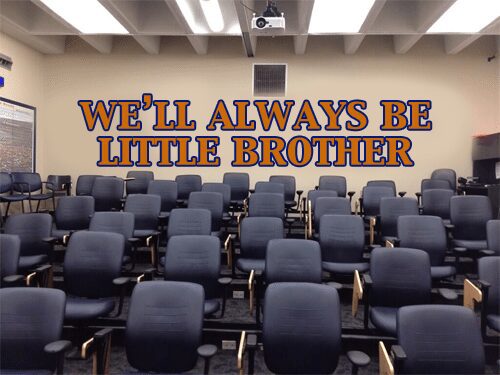 118 thoughts on “How do you know Auburn is decades behind Alabama? The answer is in your Sunday Cup of Coffee…”