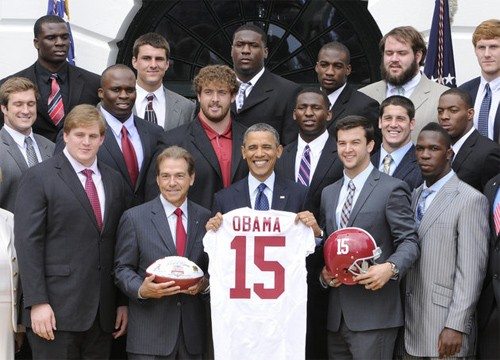 Though Bama’s third trip to the White House in four years was later overshadowed by the explosions at the Boston Marathon, the team once again met the Commander In Chief for an in-person congratulations on winning it all.

President Barack Obama joked that he thought about adding some cots to the White House for the Tide football team and staff because “they’re here so often.”

“Since I’ll be around for four more football seasons, I expect I just mights ee these guys again before I leave.”

Even the normally business minded Nick Saban had a few quips for the president.

“This is a really special occasion and something you never really get used to, so we really appreciate it,” Saban said. “I might say we’re kind of keeping inventory of what we’ve been giving you and now you have a full uniform, you’re an official member of the team. I will have a meeting later with you to decide how much playing time you’re going to get.”

“From the beginning of spring practice, the best teams in the country had one goal and that was to try to at least be as good, if not better, than Alabama,” Obama said. “The Tide kept on rising to the occasion and they never let up.

“This title also belongs to everyone who helped these young men get to where they are today,” Obama said. “Family and friends, high school coaches and loved ones, trainers, staff, grocers. These guys eat a lot.

“It belongs to every student who came to every game. All the fans who yelled, ‘Roll Tide!’ at kickoff and cheered on the Million Dollar Band.”

The most powerful man in America presented the president of the United States with a signed football, and a helmet and white road jersey, both displaying the number “15.”