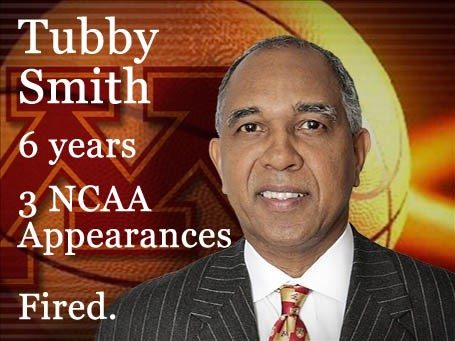 Can you imagine, even for a second, the University of Alabama firing its head basketball coach after he led the Tide into the second round of the NCAA Tournament? Or got them into the big dance every other year?

That’s exactly what happened at the University of Minnesota, as the Golden Gophers let their head man go today.

“Tubby has had a long and distinguished career and we feel it’s time for a fresh set of eyes for our student-athletes and our program in general. We are grateful to Tubby and his entire staff for their hard work and dedication to this University, our students and the entire Minnesota community. We wish Tubby, Donna and the entire staff well.”

The significance in relation to Grant? Grant and current VCU basketball coach Shaka Smart worked for Teague when he held the same post at Virginia Commonwealth University. Both are rumored to be at the top of the list as Smith’s replacement.

Tubby Smith led the Gophers to three NCAA Tournament appearances in his six seasons as head coach. Last Friday Smith’s Gophers gained their first NCAA Tourney win since 1990 against UCLA, but the accomplishment wasn’t enough to save his job. His overall record was 124-81, but his Big 10 record was 46-62.

But would Grant want to go to a place with such lofty expectations? At Alabama, just making the field of 68 is cause for a parade. Smith made the dance 50% of the time and got canned. Grant has made it just 25% during his tenure, and seems to be a well-kept millionaire on easy street.

Still, would Bama fans be sad to see him go, if he does leave? That question may be a little premature.

But maybe, just maybe, regardless of what happens, Alabama fans should sit up and take note. There is a basketball program out there led by a forward thinking A.D. that expects more than a song and dance at the end of each season. He expects music in THE dance.

Something that hasn’t been heard around Tuscaloosa for a long time.