Barners will be barners. I ran across a hilarious video this morning illustrating more of the bush-league tactics of our little brothers.

Every good cult needs a propaganda video to convince the brethren that they are on the right path. This one, released by the Auburn Athletic Department…not a fan, mind you…is simply entitled, “February 21 Winter Workouts.” It shows Auburn coaches putting the team through drills in their indoor practice facility, complete with inspirational music playing behind the footage, and assistant coaches barking the word for the day at players.

“We got a plan, and we know how to be successful ta, to make it win.”

My favorite is the towel tug-of-war it shows the players engaging in. 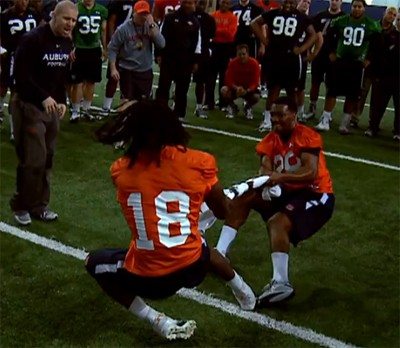 But then, at about the 2:17 mark, to give the Auburn fan watching frenzied hope between what they’ve just seen and past glory, not missing a beat, it flashes to highlights of the 2010 national championship season.

I’m freaking serious. As if there is any connection whatsoever.

Gus Chizik has been a head coach one year, and a once-in-a-lifetime quarterback ain’t walking through that door anytime soon…the true key to that unlikely season. But that’s the propaganda/Auburn zen being peddled today.

Why is this video needed? Who reached the decision that it was necessary? What is its purpose? Is morale in the Fambly so low that a concocted propaganda film is the way to go?

I don’t remember footage of Nick Saban’s famed 4th Quarter Program being released when he was in the midst of turning the Tide from losers to champions. But then, we are talking about Alabama, and a coach who doesn’t flaunt his process into the public light.

Everything…I repeat…everything Auburn does remotely positive is placed in public view as a way of saying, “Look at me…hey you, look over here. I’m something too…look!”

Hilarious. Barners will be barners, lapping up catch words and subtle suggestion by its leadership to believe fairy tales with happy endings.