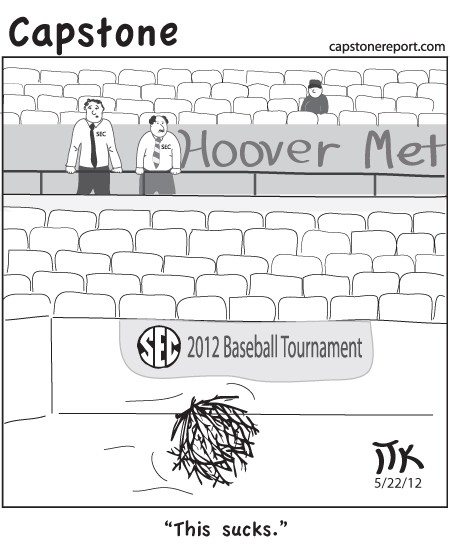 As the Southeastern Conference baseball tournament begins, Hoover businesses are getting ready to feel, well, not much of anything.

Since the Alabama baseball team invented new and creative ways of being terrible this season, the city of Hoover will feel the brunt of their malfeasance with lower than normal revenue over the week and weekend.

“When Alabama isn’t in you might as well not even play it.”

So said Rick Dedmon, former controller of the Wynfrey Hotel. “When Bama isn’t there it’s like having Christmas without Black Friday.”

Hotels aren’t the primary benefactors from Alabama’s presence so much as restaurants and other business like convenience stores in and around the area, but there’s still a marked difference even in the hotel industry.

“Alabama fans travel. Pure and simple. And some will stay at a hotel even though home is less than an hour away.”

It’s a well known fact that Alabama fans are a gift to the travel industry. It’s not quite a “build it and they will come” mentality…it’s more certain than that. Put a quality product on the field and Alabama fans will respond…in droves.

For all the jokes about southerners, their passion for sports is no laughing matter. And at the top of that list are Bama fans, who will travel to the moon if their Tide has a chance to do something worth watching.

“When Alabama has a down year there’s no comparison (financially) to when they’re on top” said Linda Carper, one of the founders of Bama Fever. I met Linda years ago while doing business with her, during the Dubose regime to be exact. A delightful lady who has withstood some of the best and worst coaches in ‘Bama history, she understands the big business that is Bama sports perhaps better than anybody.

And it is that. There’s a reason why Bama consistently finds itself in the top tier of programs who finish in the black each year.

In fact, this spring The Sporting News reported that a recent study showed Alabama as the most profitable athletic program in the country, netting a cool $31,684,872 in 2010-2011. Penn State was a close second, but the Tide was the only SEC school in the top ten. The SEC’s closest competitors? Arkansas and LSU…trailing by a whopping $20 and $21 Million, respectively.

Where was Auburn? Try 26th, banking less than a 10th of what the Tide raked in.

Numbers don’t lie, and those numbers aren’t exceptions to the rule. They ARE the rule.

So when a tournament rolls around where 66% of the league’s membership is invited to participate, Alabama does no one any favors by not fielding a team good enough to have its ticket punched.

But when you tune in this week in-between yard work and King of Queens reruns, the empty seats you’ll see everywhere represent more than just an immitation of a UAB homecoming game.

Will the remaining eight teams bring fans? Of course. But you’re kidding yourself if you say it’s the same.

But it’s because it’s in Birmingham, right? Partially, yes. But keep an eye on Oklahoma City if the Tide softball team makes it to the World Series. Last time I checked that city isn’t in Jefferson County, AL, but it’ll be swarming with Crimson and White, and Hampton Inns, Best Westerns and maybe even a Hilton or two will be smiling because of it.

So Mal Moore, you listening? Great job on the Saban and Grant hires. But will you please get us a baseball coach that can lead us back into the baseball relevance we once enjoyed? The City of Hoover…and wherever a future site for the event may be…thanks you in advance for looking into it.

10 thoughts on “Hoover braces for baseball tournament without Bama”