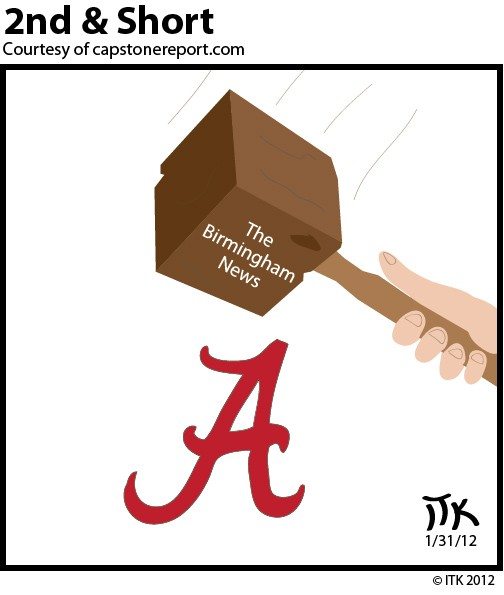 If you remember, it was Gould who held hands with Paul Finebaum wannabe Kevin Scarbinsky last summer in the “T-Town Menswear” story, one of the biggest non-stories in the history of Alabama reporting.

That story mysteriously broke near SEC media days and the beginning of fall practice, though the actual incident had been introduced, investigated and dismissed by the University of Alabama the winter before.

But the facts of that story didn’t stop Gould’s and Scarbinsky’s vigor to “find something” on Alabama.

If you’ll notice, that sound you hear are thousands of crickets chirping ever since the two media goobs swung with all their might…and whiffed…for their “Pulitzer moment.”

If you’ll remember it was Collins’ mother, April Justin, who completely disrespected her son and his wishes on national television during the UnderArmour High School All-Star game.

When the young man had the opportunity to make his decision on where he would go to school, he chose Alabama. Immediately however, his mother (clad in purple and gold) began shaking her head. And, when momma had the mic what did she do? Told America her son had made a mistake.

Most respecting parents have those conversations in private; nothing was final at that point, and signing day, after all, wasn’t until February 1. But Ms. Justin elected to speak her mind with the world watching.

While being recruited, her son had a two-year span of time to make his college choice, and when his moment had finally arrived, momma trampled all over it.

Hard to understand why the young man lives with his father and step-mother. Now THERE might be a good story.

Fast-forward now to Monday night, when Izzy’s little fingers hammered away on his computer, so excited to give this poor excuse for a maternal figure a voice. Someone that selfish, that disrepectful of her own flesh and blood…what in the world is her story worth?

Izzy thought it was priceless. The man at the center of trying to create mayhem for the University of Alabama last summer again had his chance.

This, in a capsule, is what is wrong with the media today. Media members like Izzy Gould want to CREATE stories…or more specifically, BE the story…when in the past members of the media REPORTED stories.

But this is what we’ve come to expect from the feminine hygeine product called The Birmingham News. A “hit piece” on Alabama recruiting two days before National Signing Day, while The News, again, run by an Auburn graduate, continues to lob layups at the school in Lee County.

Where was the investigative piece on Cam Newton?

Where was the investigative piece Sunday night when Arik Armstead chose Oregon over Auburn, mainly because Oregon’s Chip Kelly “didn’t do any negative recruiting.” The obvious insinuation there is that Auburn, and others did. Where’s the story there? What did Auburn do? What negative tactics does Auburn employ?

Or here’s a story. Why don’t we investigate why Auburn’s recruiting, one year removed from a national title, is in the toilet. Why isn’t Auburn getting the recruiting “bump” you typically get just after winning it all? Could it be that in the wake of escaping the Cam Newton saga by the skin of their teeth there is now an NCAA microscope that Auburn now lives under, so the tactics of certain towel wavers long thought to be dirty (well before he came to Auburn) have had to be put on hold?

Why else would top recruits like Armstead, TJ Yeldon and probably Eddie Goldman not want to be “Auburn men” fresh off of the Tigers winning their first ever national title?

But Izzy, let’s give this person a voice. The birth mother of one of Alabama’s most prized recruits, two days before National Signing Day, who fervently wants her son to do what she wants him to do over what he, his father and others in the family want him to do.

Izzy’s story centers on Collins’ mother’s disdain for Alabama, and her unconfirmed allegation that Alabama head coach Nick Saban offered Collins’ girlfriend an internship ahead of “20 other girls” on a waiting list–as if Ms. Justin would be privy to such inner-circle University knowledge.

But ole Izzy quotes this lady chapter and verse like a revival preacher.

Izzy then quickly points out:

“If Saban did offer Collins’ girlfriend a job, it could violate NCAA bylaw 13.2.1, which prohibits anyone with a school’s athletic interest from making arrangements for giving or offering benefits to a prospective student-athlete’s relatives or friends. NCAA bylaw 13.2.1.1 letter (a) specifically prohibits “an employment arrangement for a prospective student-athlete’s relatives.”

Last time I checked, a girlfriend isn’t a relative. And if she is about to be a UA student, on her own accord, from a family with Alabama ties, good luck swimming in that cesspool of ambiguity.

What Alabama fans are so tired of are Alabama beatwriters who seem to time their stories for maximum effect…or damage. This while Auburn beatwriters continue to pen “feel good” pieces on recruits no one has ever heard of, seemingly right from the Auburn Sports Information Dept. This just months after their pinnacle moment.

Landon Collins, the top safety prospect in the nation, will sign with Alabama on Wednesday, and for her sake, I sincerely hope Ms. Justin the best. We will gladly offer her a second and third chance to demonstrate maturity and good intent for her son, who wants to play for the best head coach and defensive back specialist in America.

Afterall, when Dre Kirkpatrick and Mark Barron go in the first round this April, they’ll be in good company with other DBs Saban has sent to the “money round.”

There’s your story, Izzy. How top talent continues to want top coaching for top opportunity. And who knows. Maybe you wanted to write it and were overuled. But your history in “story creation” in Tuscaloosa suggests otherwise.

And as your “street cred” with Alabama fans along with your newspaper continues to die, hopefully your access to the program will kick the bucket as well.

Gould said he did not plan the story for the day before signing day, though the interview if I understood correctly took place last weekend.

On the job itself alledgedly offered to the girlfriend, Gould said he couldn’t get any clarification if such a position existed because Alabama was not talking about it.

“It’s unclear what that job would be,” Gould said, “if there’s any money/credit attached to it.”

Gould said that Collins’ mother didn’t like the way Alabama’s coaching staff handled the recruiting process. Was too focused on getting him to the NFL, didn’t talk enough about academics. She was also clearly upset over the girlfriend and her mother.

(Note mine: Alabama boasts one of the most comprehensive academic centers in the nation, with graduation rates well above the national average, and in the upper echelon of the SEC. I can’t believe this information never came up in Collins’ recruiting process. Selective memory and a preoccupation with a girl trying to steal her son may be at play here.)

And yet, Gould said “April Justin was very complimentary of the Alabama program.” So there seems to be a lot of conflicting information that is “typical of the recruiting process.”

When he asked what she would wear to Landon’s signing (remember her purple and gold at his UnderArmour announcement), Izzy said she told him “She’ll show up wearing something pink.”

Still, why even make this a story? Why not focus on Landon and not on his tacky mom who has made the story about herself? Why focus on unsubstantiated information about a job that may or may not even exist?

Izzy Gould has a job to do, and I am not saying here that he awakes daily with an agenda to sink Alabama. I am saying however that time and association is everything, and his involvement in the T-Town Menswear story last summer will haunt him for a long time when he produces stories like this one that “look” fishy from the start. Giving April Justin an open forum to speak her mind on facts that can’t be substantiated while offering zero rebuttle on matters that she may be overlooking is what stirred the pot on this story for most Bama fans.

It’s fair to say it’s not Gould’s job to tote the water for Alabama. But that doesn’t mean that after running a story like this one, on this particular day, that his next eye contact with Nick Saban in the press room is going to be a comfortable one.