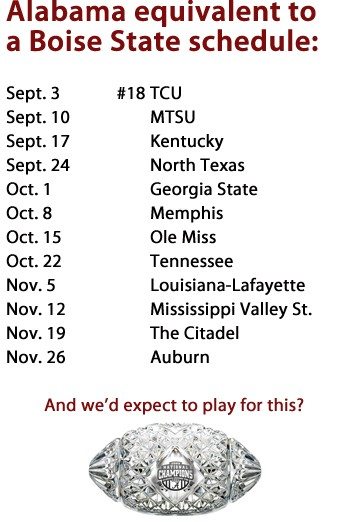 Last night #7 Boise State closed another tough season with a thrilling win over unranked and 6-6 opponent Arizona State in the Nevada something or other bowl.

Kellen Moore was heralded all night long as the winningest QB in college football history, and cameras captured neat-o signage from the Boise State fanbase crying for their chance to play for all the marbles. Or crystal, as you will.

My favorite fan sign of the night: “We Deserve Better.”

You’re right, Boise State fan, you DO deserve better. Your athletic program should have moved to put you in a real conference, against real competition years ago.

After your lone moment in the sun against Oklahoma in the Fiesta Bowl…a Sooners team that took you as seriously as Alabama took Utah in the 2009 Sugar Bowl…your Athletic Director should have been on the phone with every conference in America trying to gain entry so that teams that matter would have to come play on your goofy blue field.

Now don’t get me wrong. I know closing a season against New Mexico after back-to-back tilts against San Diego State and Wyoming is a killer. And we know how hard it is to travel to Toledo ANY year.

And UNLV. Dang. UNLV. The crowd noise in that game must have made it hard for your coach’s kids to hear their iPods up in the stands.

We don’t deny you have a competitive football program. Your wins over Virginia Tech and Georgia to start the season the last two years were legit, although neither of those teams were the best in the country either year.

And your win over Oklahoma in the 2007 Fiesta Bowl was straight up.

But if Alabama faced one ranked opponent in the first week of the season, then feasted on eleven cream puffs, nobody in their right mind would sit on national TV and campaign for Alabama’s place in the BCS picture.

Instead, it’s been the trendy thing to do for attention whores like Tim Brando to talk about how you belong. But their argument is undercut by the fact that these are people who hate the BCS and want to see it crumble.

I admit, I don’t necessarily like the BCS and would like to see some sort of playoff determine the championship on college football’s most elite level.

But arguing that you, Boise State, belong anywhere in the picture in the present set-up is like arguing that I belong in Stephen Spielberg’s next picture because I did a good job in a local community theatre production.

Finally, your program recently joined another conference, the Big East. Thanks for THAT baby step toward relevance. Can’t wait to fire up the grill in anticipation of your Saturday night clash with Cincinnati.

Boise, from your disorienting blue turf to your patsy schedule, your entire program is a joke. So forgive me for not lifting my eyes from this month’s issue of MAD Magazine to look at Kellen Moore being paraded as a hero.

Fifty wins in a career with your schedule, in your conference isn’t an accomplishment. It’s a given.