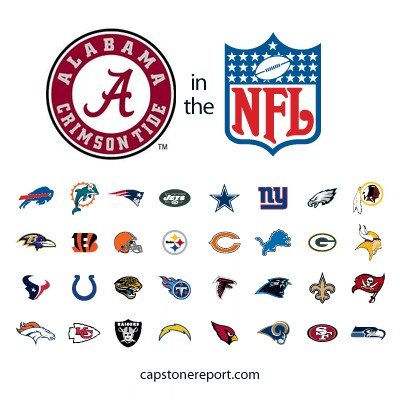 With the NFL regular season now a quarter of the way through, the contenders are beginning to step forward. The Crimson Tide has a presence on teams like Green Bay, Houston, Buffalo, New England and Baltimore, who appear to be on their way to good seasons.

The ‘Bama highlight of the weekend had to be rookie Julio Jones with eleven…eleven…catches. There are good high school receivers that don’t catch eleven balls in one game. Julio is doing it in the NFL.

Another stat that jumps out at me is Mark Ingram’s 17 carries against Jacksonville. The effort only resulted in 55 yards, but 17 carries is a lot of trust from a coaching staff whose employment comes solely from wins and losses.

One concern was Kareem Jackson for Houston. He apparently tweaked a knee in practice last week and didn’t practice or play the rest of the week. We’ll keep an eye on that.

Here are the numbers for week four: