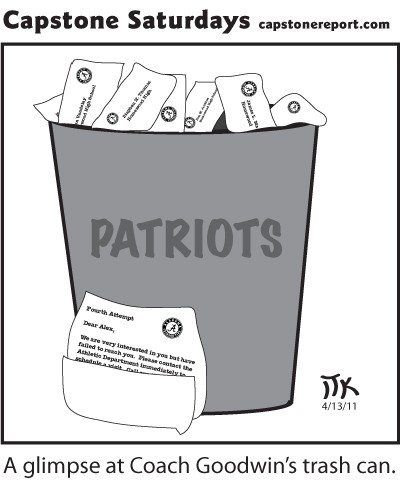 According to the words of his former player, Homewood High School’s (Birmingham, AL) Coach Doug Goodwin is a piece of work.

Brent Calloway’s recent interview with Tidesports.com paints a grim picture of a man teetering on the edge of odd if not childish behavior.

“Like the week of signing day I had to cut my phone off. Coach Goodwin was blowing my phone up everyday. All day long, blowing my phone up about this, this and this. ‘Where you at? I need to talk to you.’ Coach Goodwin was blowing my phone up. And when he found out that I was going to Alabama, it was like he started sending me crazier messages, talking about, ‘I’m going to get in trouble.’ I was like, ‘Coach Goodwin, nobody has paid me to do anything.’ He told my dad it’s a shame he forced me to go. I said my dad can’t force me to do nothing. Peaches is my guardian. And for that matter, he has limits on what he has say so over. And college is not a say-so any parent has over his son or daughter. That’s a decision they have to make.”

Calloway went on to say that the Goodwins (including his wife) haven’t spoken to him since changing his commitment (and eventually signing) with Alabama (from Auburn).

Read the entire article by Aaron Suttles at Tidesports.com…well worth the subscription in my opinion.

We’ve made the claim many, many times here that Auburn University’s fan following resembles more of a cult than a following. When you try to leave a cult, that’s when the cult members get nutty, resorting to odd measures to keep you in. Notice any similarities?

The bigger question is, parents, would you want your child to play for this man? If the University of Alabama has interest in him, will you ever know?

Tuesday, a caller on the Finebaum radio program, a former player of Goodwin’s while at Demopolis called in. He was one of several who wanted to weigh in on their former coach. Simply put, he said it best:

The caller and others went on to paint a vivid picture of a coach who would be capable of what Calloway has alleged.

Also on the Finebaum show Goodwin’s sister called in. She said he’s one of the finest Christian men she’s ever met, and she’s not just saying that because he’s her brother. Neat. She also wanted us to know he once let a black boy sleep on his couch. Hearing her really changed my opinion.

Keep in mind through all this, what if Goodwin was a source in part to Jeffrey Lee’s landmark distraction last week? How does the idea of a coach telling a player that if he commits to Alabama he’s going to get in trouble strike you? And if this is so, was that a threat of things to come in return for scorning his beloved * University?

Sounds like the Homewood School system has some decisions to make. Good coach with a great record, but an apparent questionable track record brought to light by some of his own.

He may be fine, and maybe all this will deliver the wake up call he needs. But if I had a son playing football at that high school, based on what is coming out via Calloway, Finebaum and others, I would be more than concerned.

47 thoughts on “A glimpse at Coach Goodwin’s trash can”