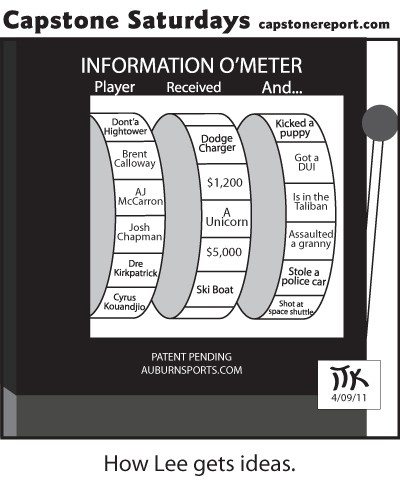 While people are laughing at AuburnSports.com “writer” Jeffrey Lee for his recent actions on an Alabama radio station, the question has to be asked. Where does he get his information from?

Lee has a longstanding and unapologetic love for Auburn football, and an apparent subsequent loathing for its rivals. Hardly a “journalist”, his site’s hand in the Big Cat Weekend cover up shed that title for him.

He could more likely be referred to as a “supporter” of Auburn athletics. An athletic supporter…yep, that just about sums him up perfectly.

But here, don’t take my word for it. Read what was said just yesterday in the mainstream about Mr. Lee and his site:

“AuburnSports.com is a part of the Rivals Network. Like all Rivals sites, it is independently owned and operated with minimal oversight. And like all Rivals sites, some degree of “homerism” is to be expected on the editorial end. They’re mostly, if not completely, owned by people with at least an interest, if not an outright emotional attachment, to the teams they cover, after all.”

This then, says it all:

“But some are worse than others, and in this regard, Jeffrey Lee’s site is among the worst of the worst, in my opinion. He is essentially a glorified fanboy with corporate sponsorship.”

There you go. In a nutshell. So the next time you hear the name Jeffrey Lee, I invite you to associate it with other names you’ve come to love laughing at, like Baghdad Bob, Bill Clinton, OJ Simpson and others, whose word is about as good as a wooden nickel.

Look, what Jeffrey Lee does is entertainment, much like what I do is entertainment. I love Alabama football and believe Auburn is a secondary school infested with little-brother syndrome. Hence, their fanbase tends to act irrationally, disregarding common sense for the sensational headline “that I a’hope izza true!”

The difference is, what we discuss here regarding Auburn comes through verifiable sources like, I don’t know, The New York Times, Home Box Office, ESPN, the Sporting News…you know, impartial members of a multibillion dollar industry with an obligation to reporting the truth. We don’t allege information, simply report it.

Maybe Jeff should shed his fantasy device and do the same. Maybe he’s about to provide shockingly accurate details that substantiate what he said on air.

But it’s more likely that what came out of his mouth is similar to the wind produced after a good Mexican meal.

25 thoughts on “Where Jeff Lee’s ideas come from”