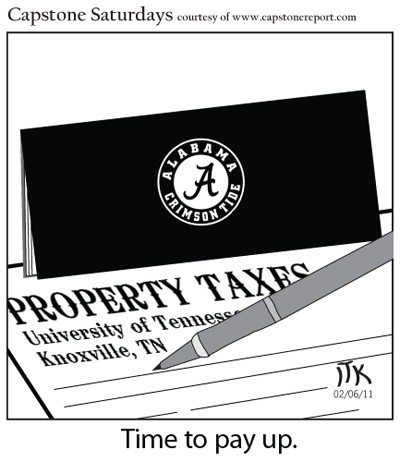 Knoxville, TN – Caught amid the Cyrus Kouandjio news, the University of Alabama basketball team took down the Tennessee Volunteers in Knoxville Saturday night.

The win marks the second time Bama has humbled the Vols on their turf in the past four months.

The Tide slapped the Volunteers 41-10 in football on October 23rd in Neyland Stadium, then 105 days later basketball’s version of the Crimson Tide had the privilege of taking down the Big Orange in Thompson-Boling Arena 65-60 in OT.

Rarely do you have the chance to rip both Auburn’s and Tennessee’s heart out on the same day. With the Kouandjio news and the Tide win on Ole Rocky Top, indeed…life is good.

The win in Thompson-Boling Arena marks the second visit in a row the Tide has beaten the Vols on their floor, the previous win coming on March 8, 2009, a last second buzzer beater.

The Crimson Tide football team holds the same win streak in Neyland Stadium, with a 29-9 whipping on October 25, 2008 to couple with their win last October.

It may be time to get out the check book to pay our property taxes.

And with the NCAA clouds starting to roll in, current Vol fans may soon be telling their grandchildren about seeing the Big Orange beat Alabama in something in east Tennessee.

With Saturday night’s win Alabama (15-7, 7-1) nurses a one-game lead over Florida for the overall SEC season title and a three game lead over Mississippi State in the SEC West.

“You have to give credit to all our guys,” UA head coach Anthony Grant said. “Everybody on our team who got on the court did something in the course of the game that made a difference tonight to give us the win.”

Alabama gets a long week before heading to Nashville on Thursday to take on the Vanderbilt Commodores, an 8:00pm tip in their odd facility, Memorial Gymnasium. Alabama hasn’t won there since 1990. The game will be televised nationally by ESPN.