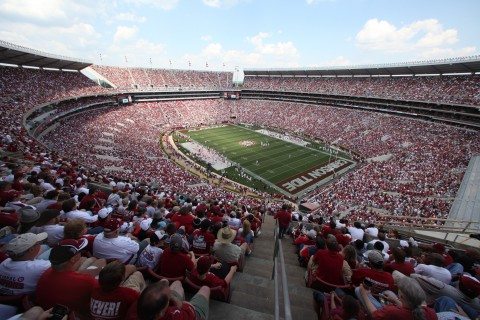 Here are the official game notes from UA Media Relations:

4TH QUARTER RALLY GIVES WHITE TEAM 23-17 WIN OVER CRIMSON IN GOLDEN FLAKE A-DAY GAME
The White team scored 16 unanswered points in the fourth quarter, including a game-winning 39-yard catch by Brandon Gibson on the final play, to earn a 23-17 victory over the Crimson Team in the 2010 Golden Flake A-Day Game before a crowd of 91,312 at Bryant-Denny Stadium and an ESPN national television audience. Gibson nabbed the pass from quarterback A.J. McCarron with no time remaining for the victory. Trailing, 17-7, entering the fourth quarter, the White team closed to within 17-14 on a 25-yard pass from Star Jackson to Demetrius Goode with 10:43 left, then tied the score at 17-17 on a 27-yard field goal by Cade Foster with 3:13 remaining. The Crimson Team had built its 17-7 lead on a 20-yard Jeremy Shelley field goal with 3:10 left in the first quarter, a 39-yard pass from Greg McElroy to Marquis Maze with 10:54 remaining in the second quarter and a 5-yard run by Eddie Lacy with 12:20 remaining in the third quarter. The White Team’s only score before the fourth-quarter rally was a 28-yard pass from McCarron to Trent Richardson with 32 seconds left in the first quarter, giving the White Team a 7-3 lead entering the second quarter. Running back Mark Ingram earned the Dixie Howell Memorial Most Valuable Player Award with 90 yards rushing on only 9 carries. Defensive tackle Marcell Dareus earned the Dwight Stephenson Lineman of the Game Award with 3 tackles, including 1 quarterback sack and 1.5 tackles for losses. Dareus was also credited with 2 quarterback hurries. White Team defensive back Robert Lester led all tacklers with 8 tackles. Gibson led all receivers with 8 catches for 142 yards and 1 touchdown while McCarron passed for a game-high 196 yards while completing 12 of 28 passes for 2 touchdowns. McElroy completed 12 of 22 passes for 142 yards and 1 touchdown.

91,312 WITNESS 2009 A-DAY SPRING FOOTBALL GAME
The official Bryant-Denny Stadium capacity for available seating for today’s game was 90,312. With all available seating taken, plus an estimated 1,000 additional standing room only patrons on the field level plaza and on the spiral stairwells in the northeast and northwest corners of the stadium, the official estimated attendance at today’s game was 91,312. That’s the second-highest A-Day Game mark in school history, and the second-largest crowd to witness a spring game at any Southeastern Conference school behind the 92,138+ who witnessed A-Day proceedings in 2007. Last year’s attendance was estimated at 84,050, which now ranks third in Alabama A-Day Game history. The 2008 A-Day Game drew 78,200.

SPRING FOOTBALL AWARD WINNERS
The following Alabama football players were honored for the performance throughout Spring Football Practice with the following awards bestowed by the Crimson Tide coaching staff:

INGRAM & DAREUS ARE A-DAY GAME AWARD WINNERS
Two players were recognized today for their outings in the A-Day Game. For the second consecutive year, junior defensive lineman Marcell Dareus was voted by the media the winner of the Dwight Stephenson Most Valuable Lineman of the A-Day Game Award. Dareus was credited with 3 tackles, including 1 quarterback sack, 1.5 tackles for loss and 2 quarterback hurries. Junior running back Mark Ingram earned the Dixie Howell Memorial Award as Most Valuable Player of the A-Day Game. Ingram finished the day with 121 all-purpose yards, rushing for 90 yards on 10 carries, including a 60-yard run. He also had 4 catches for 31 yards.

A-DAY GAME FORMAT
The format for today’s game was much like a normal game, with a few minor variations primarily regarding the game clock. The game consisted of four 15-minute quarters with a running clock. The clock stopped only following scoring plays, penalties, and changes of possession. Regular clock rules were used during the final minutes of the second quarter and the fourth quarter.