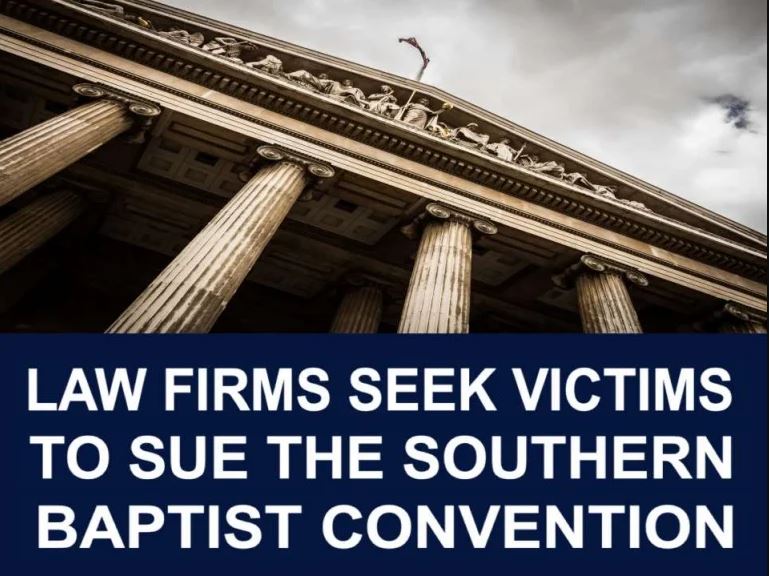 The Southern Baptist Convention’s report on Sex Abuse was mostly old news—other than the Johnny Hunt allegations almost everything was already public record. So, what was the point of the report? It was an attempt to gain opposition research on political opponents; however, that backfired when the SBC Establishment in a Kevin Ezell employee (Hunt) was exposed. Also, the report is a chance for Leftists to virtue signal. And that virtue signaling is costly. Sharks are circling. Law firms are spending money on ads on Google and social media to find clients.

Over 20 different ads were found by one Southern Baptist and compiled into this presentation.

They smell blood in the water.

The self-inflected wounds are many. Virtue signaling is often costly—and the task force report is no different. For little new content, the SBC is now falsely tainted by a Guidepost report that was shoddy. You can read about the falsehoods in the report exposed by The Baptist Message, “False claim secretly deleted from pro-gay Guidepost’s report,” and The Daily Wire.

The Leftist mainstream press breathlessly repeated the lies of Russell Moore about this report. Why? Because they all serve their father the Devil. And, after all, if you can’t see it you need to look carefully at who are working with the lost against the mission of the church—it is Russell Moore and his ilk who are all Enemies of the Church.

The lawyers’ hope is to turn isolated cases in local churches into a class action against all Southern Baptists churches. Of course, before the task force there was no ascending (or for that matter descending) liability.

That could all be different now. Polity shifts, negative publicity caused by virtue signaling, and reckless court filings by NAMB and the ERLC place the SBC in jeopardy.

Only time will tell the damage waiving attorney-client privilege will do. However, there is one real thing we know will be used against the SBC in future lawsuits—filings by NAMB and the ERLC.

The ERLC declared the Southern Baptist Convention to be a hierarchy in a false legal brief that even the liar Russell Moore was forced to repudiate once it became public.

Just so you know, the ERLC claimed, “The primary, leading convention, or group, is the Southern Baptist Convention which is the umbrella Southern Baptist governing body over all the various groups of churches…Within that hierarchy are several organizations.”

In its legal filings, NAMB claimed that it had employer rights and privileges over what most Southern Baptists think are independent state conventions. This NAMB filing at the Supreme Court will find its way into court cases alleging the SBC is some type of hierarchy. You can count on that.

Is all this intentional or just reckless self-aggrandizement?