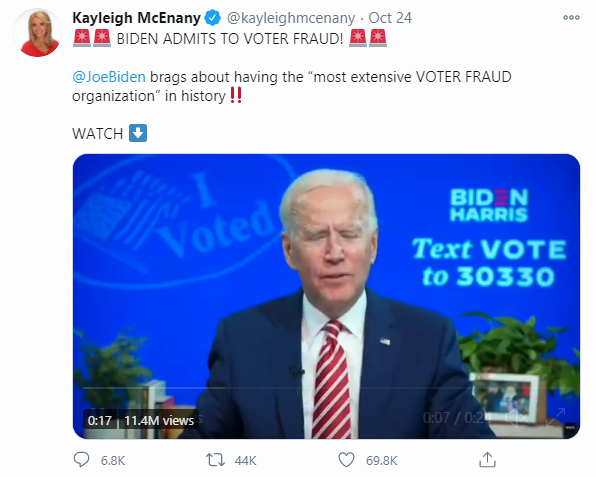 Maybe it wasn’t a gaffe after all

As we watch a surprising number of found ballots helping out Democrat presidential candidate Joe Biden, it is worth remembering what he said just a few weeks ago. As President Donald Trump’s spokeswoman Kayleigh McEnany pointed out: “Joe Biden brags about having the ‘most extensive VOTER FRAUD organization’ in history‼”

According to Fox News, here is exactly what Joe Biden said: “We have put together, I think, the most extensive and inclusive voter fraud organization in the history of American politics,” Biden said in the video.

We all thought it was a gaffe.

Does anyone doubt Democrats are trying to steal the election?

Stop the Steal is a new rallying cry for conservatives. We all know something odd is happening. Our eyes tell us as much.

Democrats are keeping Republicans from viewing ballot counting in Philadelphia. If they have nothing to hide, then why not let people watch?

Similar nonsense is happening in Nevada.

Hey, I bet more than a few Democrats wish Joe Biden had shared that “extensive voter fraud organization” with them. Things are going poorly for Democrats in the House and Senate who were hoping for a Blue Wave.

Democrats are facing loses of seats in the House of Representatives. In fact, with GOP gains, some forecasts have the Democrats facing a tight majority—perhaps the smallest majority since the New Deal Era.

“It looks like they (the GOP) will end up with 209-214 seats.  (The latter resulting in smallest House majority (for Democrats) since New Deal).”

The situation is so serious, that the Donald Trump Campaign is asking voters to report specific cases.

It is time for conservatives to act decisively to bolster the rule of law. Our Constitutional system hangs in the balance. We must now allow Joe Biden’s “unprecedented” voter fraud organization win.