Ole Miss is doing an incredible job of recruiting this year. Whenever you see a middle of the pack team suddenly come into its own on the recruiting trail, it doesn’t raise any suspicions at all. After all, top recruits who want to make a living playing professional football one day very often choose to go places that don’t typically make that happen for college football players.

Hugh Freeze is just an up and coming coach doing a great job in leading his program. The fact is, with a handful of years’ experience as a head coach, he cut his teeth at schools like Lambuth University and Arkansas State, and now that experience is paying dividends in a big way at the University of Mississippi.

And wow, is it. Ole Miss is on the cusp of possibly signing the top recruit in the country, Robert Nkemdiche, adding this five star stud to the gems it’s already bagged.

But it’s no big deal because Nkemdiche’s older brother, Denzel, plays at Ole Miss. And younger brothers with bigger football futures than their older siblings always go where big brother went, even if it means going someplace where their future may hit a dead end.

Ole Miss, the only SEC West school (besides Texas A&M) who hasn’t made it to the SEC Championship game since its inception in 1992, is simply trying to make up for lost time. They couldn’t get there with Eli Manning, Mike Wallace, BenJarvis Green Ellis, Patrick Willis, Greg Hardy, Peria Jerry, Michael Oher and Jerrell Powe. But now there’s a new list of names they’re paying close attention to, hoping their investment will result in big things, helping them cash in on hardware bought by the hard work of young men willing to do what it takes, whatever the cost.

According to Rivals, the Rebels…Black Bears…er, Black Rebels…Black Bear Rebel thingies…currently have commitments from seven four-stars and a five star, with the much coveted Nkemdiche’s commitment hanging in the balance. One of these commits chose Ole Miss over Florida and Ohio State. Another picked Oxford over Notre Dame, Oklahoma and Oklahoma State. Another picked the Black Bears over Nebraska and Texas A&M…but then, what does A&M have going for it anyway? Another wanted to play for Freeze over LSU and USC. Live in Southern California for 4-5 years? Yuck.

Before anyone draws any tired, worn out conclusions of payola happening in Oxford, it’s worthy to note that in the 1960’s Ole Miss was a powerhouse, of sorts. So there’s some sort of underlying tradition there that’s got to be drawing this talent to Oxford. The opportunity to don the red and blue jersey and play in front of screaming sons and daughters of rich, wealthy alumni wearing red pants is just too much to turn down.

National signing day is in 10 days. We’ll continue to watch and be amazed at the unbelievable job Hugh Freeze and his staff are doing. 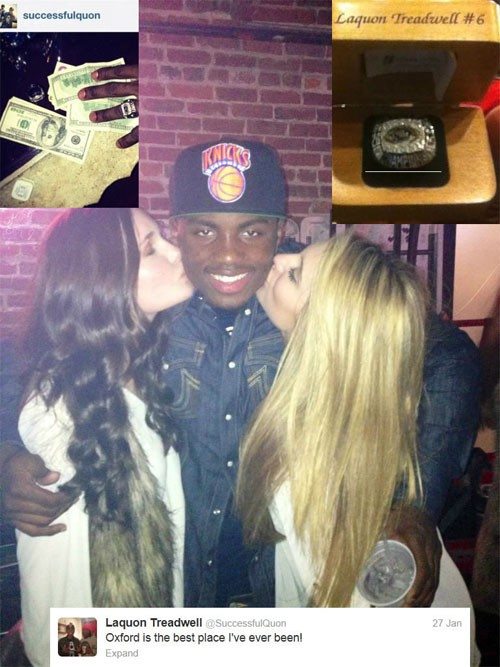